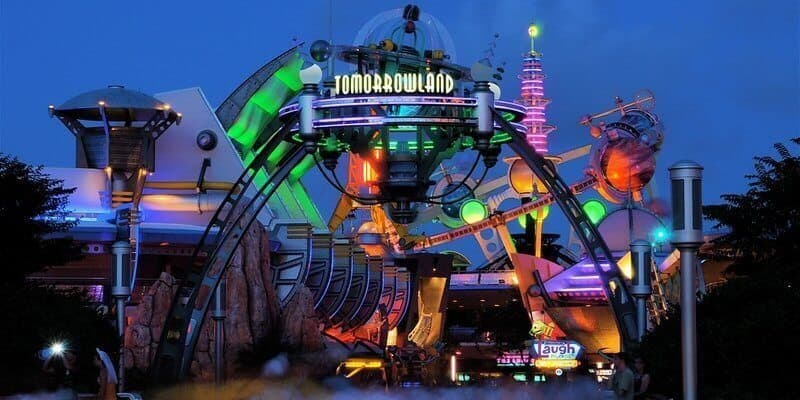 Walt Disney put a great deal of thought into every detail of his theme parks, but many Guests don’t realize just how much time was spent ensuring that each land perfectly fit Mr. Disney’s vision. Take, for example, Tomorrowland.

While some Guests feel that this particular area of Magic Kingdom Park — at Walt Disney World Resort — and Disneyland Park — at Disneyland Resort — could use an update, it remains the home of iconic rides like the Space Mountain roller coaster and the Astro Orbiter.

Plus, its futuristic design still appeals to many Disney Parks Guests. One thing we wager you didn’t know about Tomorrowland, though? You can eat the landscaping!

Yes, you read that correctly. Because Mr. Disney believed the future world would be self-sustaining, he wanted edible plants placed throughout the Tomorrowland section of his Parks.

At one point in time, 100% of the vegetation in Tomorrowland was fit for consumption by humans, but according to a recent report, about 80% is safe to eat nowadays:

So, while we don’t recommend actually eating the landscaping next time you visit Tomorrowland — we don’t want another Living With the Land cucumber situation on our hands — this is a fun fact you can add to your Disney repertoire!

Tomorrowland Moving Into the 21st Century

In 2019, Disney announced plans to reimagine the entrance to Disneyland Park’s Tomorrowland area, updating its aesthetic and giving it a more contemporary look.

According to the original Disney Parks Blog announcement:

When “new” Tomorrowland debuted in 1967, Walt Disney and his Imagineers envisioned this land as a “world on the move,” featuring a variety of futuristic vehicles zooming around and the Googie architecture that had become representative of the Space Age. Today’s Imagineers are creating Space Age-inspired spires, which will flank the entrance.

More on Sustainability at Disney

The Walt Disney Company is committed to sustainability and “going green” at their theme parks and Resorts around the world. The company’s official Environmental Sustainability website notes:

The Walt Disney Company’s commitment to environmental stewardship goes back to our founding more than 90 years ago. Walt himself said that “conservation isn’t just the business of a few people. It’s a matter that concerns all of us.” Here are just a few ways we are focused on helping to protect the planet we all share.

The site goes on to detail initiatives like solar power, sustainable building design, conserving fuel on all forms of transportation, and reducing waste across the board.

Did you know about this fascinating Tomorrowland trivia?

Comments Off on You Can EAT the Landscaping in Tomorrowland!