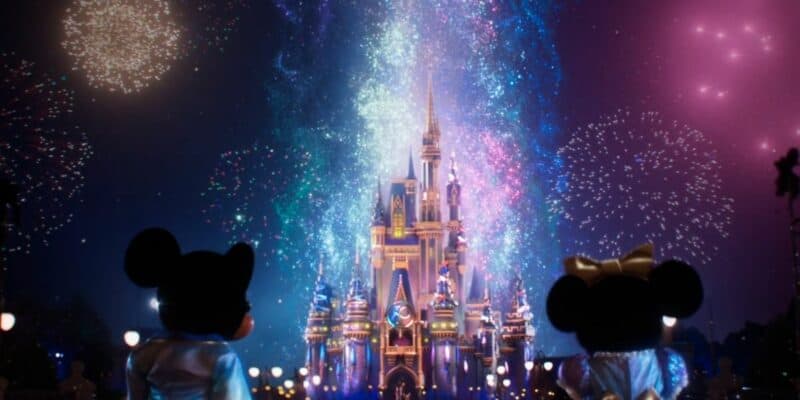 The Walt Disney World Resort is rolling out the golden carpets for the Resort’s highly anticipated 50th anniversary. Disney’s Enchantment nighttime spectacular officially debuts on October 1 at Magic Kingdom Park, and Disney fans across the globe can watch the a special live stream tonight if they can’t make it to the theme parks!

Replacing the beloved Happily Ever After fireworks show that lit the night sky above the Cinderella Castle in Orlando, Florida, Disney fans have been waiting to see what the Mouse House has planned for their new fireworks show: Disney Enchantment.

How to Watch Disney Enchantment

Though not every fan can make their way to the Disney theme parks to view Enchantment, Disney Parks Blog announced that fans will have the opportunity to watch a live stream of the newest firework show on “Thurs, 9/30 LIVE: “Disney Enchantment” at Magic Kingdom Park at 10:15 p.m. ET,” according to Disney Parks Blog.

You can watch the first live stream of Disney Enchantment on the official Disney Parks YouTube channel. Click here or below to head over to the live stream.

In “Disney Enchantment,” you’re inspired to believe in magic, with captivating Disney music, enhanced lighting, and immersive projection effects that extend – for the first time – from Cinderella Castle down Main Street, U.S.A. The evening extravaganza features stunning fireworks as well as an emotional original song, entitled “You Are the Magic,” by eight-time GRAMMY-winner and former Walt Disney World cast member Philip Lawrence.

This one-of-a-kind show features characters, moments, and music from dozens of Disney and Pixar animated films. It takes you beyond the ordinary to a land of magic, where we’re swept up in a world of wonder filled with friendship, love and fun. Through it all, we’ll discover we only have to look within to find the power to believe and make dreams come true, because the magic was inside us all along!

Both Disney Enchantment at the Magic Kingdom Park and Harmonius at EPCOT are debuting on October 1, the official kickoff for The World’s Most Magical Celebration, Walt Disney World Resort’s 50th anniversary.

Disney is live streaming Enchantment one day early on September 30, but theme park Guests won’t be able to watch the new fireworks show in person at the Magic Kingdom until October 1.

Guests will need a valid reservation for the Magic Kingdom to watch the nighttime spectacular in person, but if you’re unable to snag a reservation for the park, the surrounding Contemporary, Polynesian, and Grand Floridian Resorts, make for perfect viewing options!

Disney is debuting a brand new firework show, and fans can’t wait! Tell us about your excitement in the comments below!

Want to live out your Disney dreams? Book a trip to The Most Magical Place on Earth!