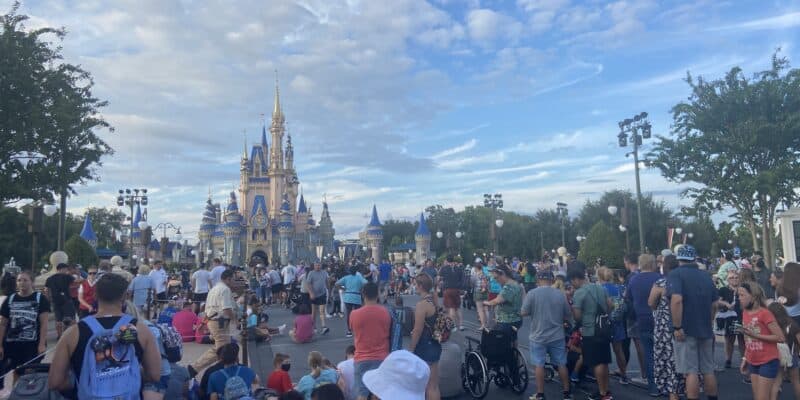 Tonight will be a historic night in Magic Kingdom as Happily Ever After will “sparkle into Disney history” to make way for a brand-new nighttime show called Disney Enchantment, which will debut on October 1 at Magic Kingdom in honor of Walt Disney World’s 50th anniversary.

This evening, Happily Ever After will light up the night sky one final time and it is clear that Guests of all ages want to witness the firework show in person as the crowds are pouring into Magic Kingdom.

Guests were seen piling onto Main Street, U.S.A., to try and get the perfect spot so they could witness Happily Ever After live for the final time before it officially retires. Below is what Magic Kingdom looked like just after 5 p.m. — as you can see, it certainly got more crowded around Cinderella Castle!

After 6 p.m., still long before the show was set to begin, the Park continued to draw huge crowds as Guests camped out for the nighttime spectacular’s final showing.

And just after 7 p.m., crowds were still piling in!

Inside the Magic is here at Magic Kingdom tonight and will attempt to live-stream the show for all of you viewers at home who could not make it out to the theme park tonight. Be sure to follow along on our social media channels (Facebook, Instagram, and Twitter) and catch Happily Ever After’s final performance tonight at 8:15 p.m. EST.

If you have not yet seen Happily Ever After, the official description reads:

And if you were unable to witness the nighttime spectacular before tonight, you can always watch a performance of it on our YouTube page here:

From all of us here at Inside the Magic, we want to thank Disney Imagineers, the songwriters, Jordan Fisher and Angie Keilhaueach, and everyone involved in Happily Ever After for a remarkable show. Happily Ever After will truly be missed.

And remember, it’s just beginning. Feel your heart beat faster. Reach out and find your happily ever after.

You will be missed, Happily Ever After.

Comments Off on Happily Ever After’s Retirement Draws HUGE Crowds