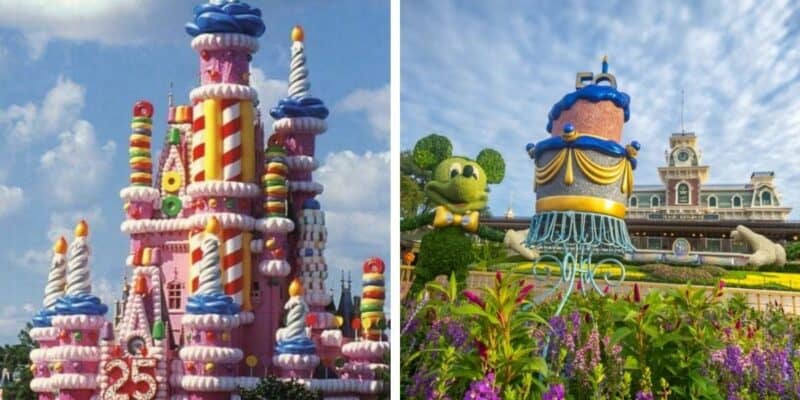 Walt Disney World Resort is currently gearing up for the 50th anniversary celebration that will begin in a few short weeks.

There have been so many changes across the property! When the theme Park icons were announced, we knew Magic Kingdom would decorate Cinderella Castle, Disney’s Hollywood Studios would give the Tower of Terror some shimmer, Disney’s Animal Kingdom would project onto the Tree of Life, and Spaceship Earth over in EPCOT would receive a permanent change as points of light would be added to the ball so that it would shine outward. We recently saw testing of the Beacons of Light, which you can check out by clicking here.

There are now banners, new signage, wraps on almost every version of Disney transportation, new shows such as Disney Enachanment, Harmonious, Disney KiteTails on the way, and so much more! We recently saw the reveal of the Fab 50 golden character statues at Magic Kingdom, and now, we are seeing the stunning Mickey and Minnie Mouse topiaries in front of the train station come to life with a giant birthday cake!

Preparations for “The World’s Most Magical Celebration” are underway all across @WaltDisneyWorld Resort, but you don’t have to wait until the festivities kick off on Oct. 1 to see the 50th anniversary celebration magic that bloomed overnight at Magic Kingdom Park. #DisneyWorld50

As we can see, there is signage in front of the train station, and the new cake matches the new colors and decor that Guests will see on Cinderella Castle once they enter the Park. Interestingly enough, the choice to have a cake in such a visible for the 50th anniversary with a blue and pink color scheme feels oddly reminiscent of the cake castle that we saw 25 years ago! Now, we have a castle cake!

Disney makes no mention that the 25th anniversary Cinderella Castle cake decor is linked to this newly added cake in front of the Park, but it is fun to speculate that there is a correlation; plus, we do know that Melissa Valiquette, vice president of Magic Kingdom, recently defended the 25th-anniversary castle!

This year, we can see that Disney scaled back to transforming the castle compared to the 25th anniversary (which many Guests are likely happy to see). The castle has a much more regal look with golden and EARisdesent accents added to the castle to elevate its elegance. Although it looks different, it is similar enough to the original castle that Guests visiting over the next 18 months will not feel that they cannot get that classic castle photo.

What do you think of the new Magic Kingdom entrance?