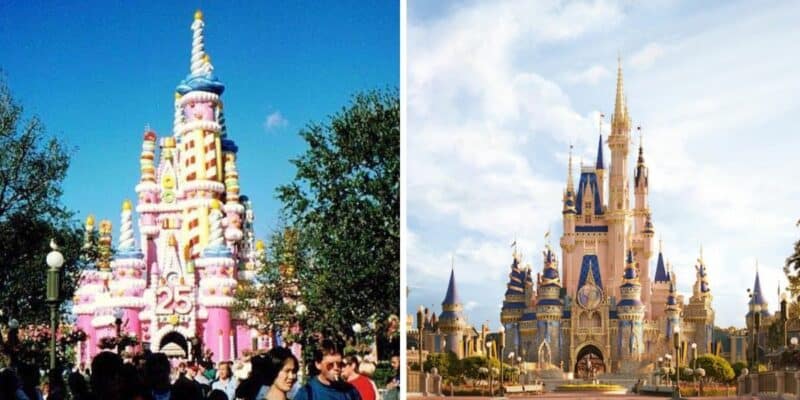 With the 50th anniversary at Walt Disney World has come a tonne of decoration, especially at Magic Kingdom. This major milestone is cause for a full Cinderella Castle transformation, which is something we also saw 25 years ago for the 25th anniversary.

25 years ago, Disney decorated Cinderella Castle to look like a pink birthday cake, and the move was highly controversial. Guests either loved the pink look or hated how different it was from the original castle. Personally, I was a huge fan of the castle. Still, I understand why Guests visiting on their once-in-a-lifetime Disney World vacation may have been upset not to see Cinderella Castle as it is typically pictured.

This year, we can see that Disney scaled back when it came to transforming the castle compared to the 25th anniversary. The castle has a much more regal look with golden and EARisdesent accents added to the castle to elevate its elegance. Although it looks different, it is similar enough to the original castle that Guests visiting over the next 18 months will not feel that they cannot get that classic castle photo.

When discussing the cake castle, Melissa stood to its defense.

Melissa also discussed the magical memories tour. The ambassadors traveled to the top 25 locations where Guests most commonly visited and did so in a massive pink tour trailer that matched the castle perfectly. They would visit malls and other public locations and once parked, the 18-wheeler would turn into a castle cake replica to try and entice other Guests to visit the Park and to also bring a little bit of Disney to Guests who could not make it to the theme parks.