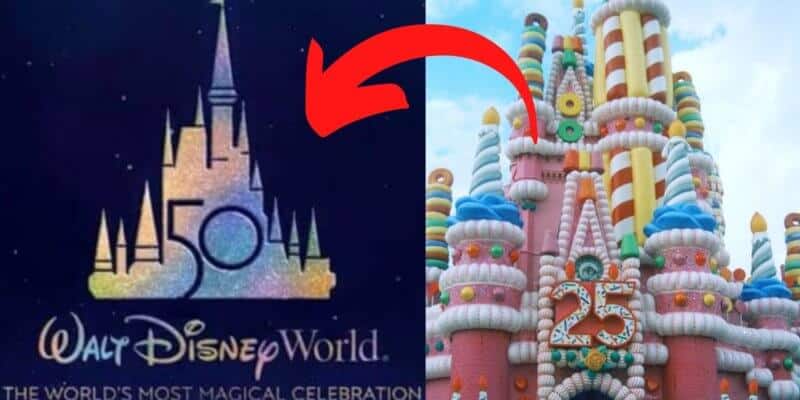 I am going to rip this one off like a band-aid: I think Disney World should bring back the pink birthday cake castle that was displayed on the 25th anniversary. Before you come at me like Gaston hunting for the Beast with torches in hand, hear me out.

Cinderella Castle in Magic Kingdom was transformed into the best looking (and tasting) food building the world has ever seen on October 1st, 1996 to commemorate the 25th anniversary of Walt Disney World. If you think the recent paint job we have seen on the castle this year was a big deal, the cake castle will blow your mind.

Now please enjoy 1 minute of the 25th anniversary celebrations from my 1996 trip to Disney World , and fall in love with the pink desert that stands before you, just like I did!

The pink cake of a castle looked like it jumped right out of Candyland and into Magic Kingdom, and let me tell you that 2 year old me was obsessed with the bright colors and cartoon-esque vibe that this castle eluded.

It may not have been the classic Cinderella Castle which many love to snap a photo of, but it was even better. The cake castle was a limited time architecture work of art that lasted 15 months, and if you have a photo with that castle, many Disney lovers who don’t are probably envious (even though they will never admit it).

For reasons to which I do not understand, the 25th anniversary cake castle has been so hated among Disney fans. If 1996 was the year you and your family were taking your once in a lifetime Disney World vacation, then I understand that not getting the classic Cinderella Castle photo could be disappointing. But on the other hand, it could also be an excuse for you to go back now so that you can have a photo with each look!

Now that the Walt Disney World’s 50th anniversary is coming up in less than a year, many Disney fans, like myself, are locking in their reservations and are eager to see what Disney has up their sleeve. There are of course many attractions that should be opening up in 2021 to celebrate Disney World’s 50th birthday, but I want to see Disney go above and beyond with the castle.

The castle was recently repainted to rose gold, but I think Disney can do one better, and that is to bring us back our cake! The Disney cake castle is still so widely discussed that a second coming of the cake would really be the talk of the town.

So many Disney fans talk about how bad the castle looked, but never actually saw it in the flesh. I think by bringing the cake castle back, you will have Guests travel to Disney World just to see it in person, which would be great for Disney financially (and also great for me, visually).

So what would Disney World need to do to make the castle cake happen again?

If Disney wants to re-create the castle as a giant birthday cake once more, they are going to need a few baking supplies. I’ll call Tiana…

Here’s what it took to cover the castle:

At the end of the day, I don’t think Disney will ever bring back the pink cake castle. Guests’ don’t like it when there’s a crane in the way of their perfect castle photo, and on the 50th anniversary Disney is going to want to please everyone. But, there is still a large part of me that hopes I get to see that masterpiece as an adult.

Would you want Disney to bring the castle cake back for the 50th anniversary? Let us know!

Editors Note: The opinions expressed in this article do not necessarily reflect those of Inside the Magic overall.