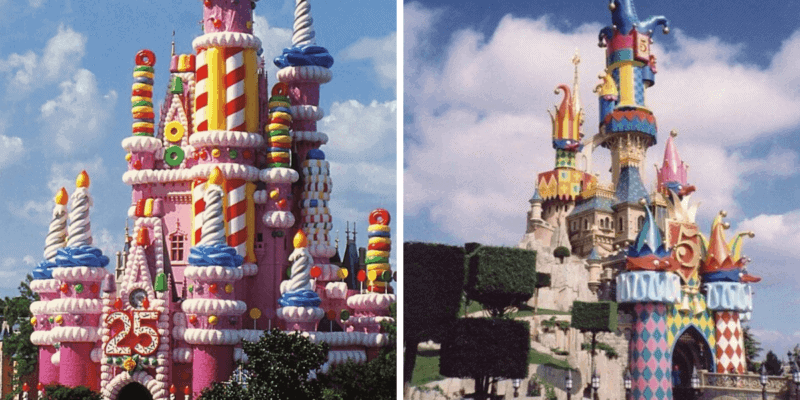 It has become quite clear here at Inside the Magic that not every Disney fan is falling in love with Cinderella Castle’s new look.

My reaction? It could be worse — a lot worse. And for those Disney fans who don’t remember some of Disney’s other castle makeover blunders, let’s take a little trip back in time to some of the most infamous overlays Disney has ever decided to put on their castles (in no particular order of infamy).

That phrase alone used in connection Cinderella Castle probably makes Disney fans feel some kind of way, and, honestly, I can’t blame them.

In celebration of Walt Disney World’s 25th Anniversary Celebration, Disney thought it would be a good idea to turn Cinderella Castle into a 189-foot-tall birthday cake. The beautiful regal centerpiece was, for a long-enough period of time, appeared to be nothing but a massive bouncy castle.

I feel a responsibility to mention that Cinderella Castle at Walt Disney World has not been the only Disney castle to fall victim to a horrible overlay. In 1997, Disneyland Paris decided to dress up the lavishly elegant Sleeping Beauty Castle like it was about to go off and join the Festival of Fools from Disney’s The Hunchback of Notre Dame.

Seriously. Disneyland Paris was built to be the most beautiful Disney park in the world, and they decided to do THIS to their castle:

Okay, now we have to go back to Walt Disney World. It seems that someone let Experiment 626 escape and he decided to have a little fun. While no one was reported hurt and no rides were affected, it looks like Stitch took out most of his ridiculousness on Cinderella Castle. He actually TP’ed Cinderella Castle and wrote some cruse graffiti on one of the turret towers that reads “Stitch is King!”

Now, out of all the ridiculous overlays, this one seems the most brilliant. Because it makes the most sense and the most immersive. Because, of course, Stitch would do something like this.

But Inside the Magic editor Bailee made a very good point to its atrocity:

Imagine this: it’s your first trip to the Most Magical Place on Earth. You have dreamed of seeing Cinderella Castle at Magic Kingdom your whole life. You spent thousands of dollars to take your family and your kids are so excited. You turn the corner on Main Street……and then you see toilet paper…….and nobody is cleaning it up…….

Looking at it like that, unless you really liked Stitch, I can see how this would not be a welcomed sight.

Yes, Spaceship Earth is not a castle, but it is good to remember this too.

Before the modern IP invasion we are experiencing today, the Experimental Prototype Community of Tomorrow already has Mickey Mouse’s hand on its landmark.

We see Sorcerer Mickey’s hand holding up a magic wand with “Epcot” written in big letters as stars of Disney Magic sprinkle the top of the sphere.

What are some other landmark overlays do you remember? Let us know in the comments!