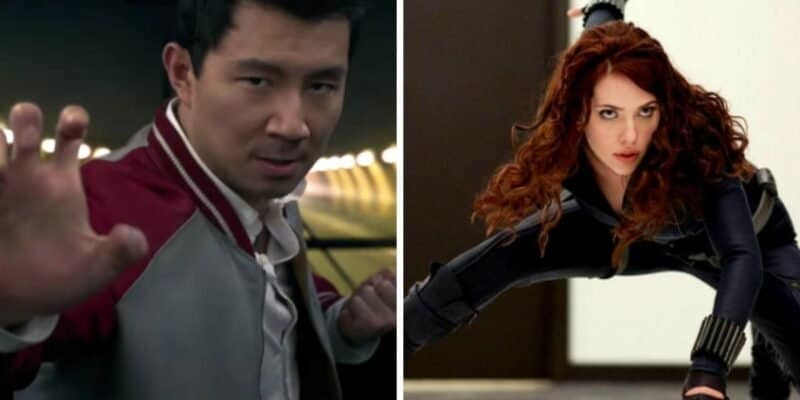 Every Marvel character is known for something. And sometimes, what they are known for is pretty hilarious.

During the virtual global press conference for Shang-Chi and the Legend of the Ten Rings (2021), it was revealed that the titular actor Simu Liu actually added another character’s flair to his audition — Black Widow’s famous (and often considered hilarious) pose.

Simu Liu, who plays the leading role — and our latest MCU superhero — Shang-Chi in the film, has some impressive acrobatic abilities. When auditioning for the character of Shang-Chi, Liu decided to show off his “parkour” skills, but he did so in a pretty epic way. In fact, Liu actually added the signature Black Widow (AKA Natasha Romanoff) pose to the end of his audition.

Destin Daniel Cretton shared that Liu “did actually the exact backflip that is, um, that pose that’s made fun of in Black Widow.”

Cretton continued, “He did a back flip into the Black Widow kneel pose — hair flip up, looking straight into the camera.”

Yes, even though Natasha Romanoff’s pose is one of her signature moves, it was actually made fun of in the recent Black Widow (2021) film, which debuted simultaneously in theaters and on Disney+ this summer.

Co-star Awkwafina (who plays Shang-Chi’s best friend, Katy, in the film) asked Liu if he ended all of his Shang-Chi auditions that way, to which Liu replied, “I mean, I thought it was like a good signature. It was like a nice little calling card…I thought it couldn’t hurt. I was auditioning for a Marvel movie which was, you know, a superhero franchise…”

Shang-Chi and the Legend of the Ten Rings is Liu’s introduction to the Marvel Cinematic Universe, so it’s no surprise that he wanted his audition to be memorable. We’re looking forward to seeing more of his character — and Awkwafina’s character, Katy, since their dynamic is hilarious! — later on. For now, get excited for the film to premiere very soon.

Shang-Chi and the Legend of the Ten Rings officially hits theaters on Friday, September 3. Read the film’s official synopsis below:

What do you think of the Black Widow pose that Simu Liu added to his Shang-Chi audition? Let us know in the comments!