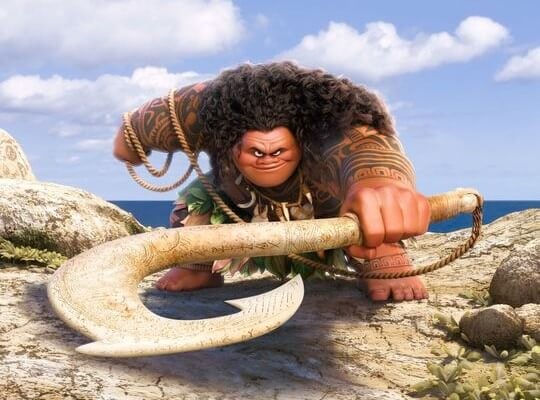 Moana (2016) is continuing to break records — and one of the film’s stars is certainly proud of it!

Dwayne “The Rock” Johnson recently took to social media to share his excitement for Moana, the Walt Disney Animation Studios film in which he stars as the demigod Maui.

In case you didn’t hear, the soundtrack of the 2016 Walt Disney Animation Studios film Moana has set a new record for its time spent at No. 1 on the Billboard soundtracks chart. Featuring fan-favorite songs like “How Far I’ll Go,” “Shiny,” “You’re Welcome,” and “Where You Are,” it’s no surprise that this is one of Disney’s most popular movie soundtracks.

Per a report from Forbes:

The Moana soundtrack has now been atop the soundtracks chart on 52 occasions since its release, setting a new record for weeks at No. 1, according to Billboard.

The old record belonged to another Disney film, Frozen II, which dominated the charts after its release in November 2019, but hasn’t held the top spot on the soundtracks chart since February.

Moana has been at No. 1 since July 31, which notably came just over a week after Walt Disney World reopened its Polynesian Village Resort—one of the two original hotels at Disney World—with a Moana theme.

Yesterday, Johnson (who is a Disney icon at this point, his most recent film being Jungle Cruise, which just hit theaters and Disney+ this summer) took to his personal Instagram platform to share his excitement for Moana. Not only is the film’s soundtrack setting records, but also the film was the most-streamed movie on Disney+, Disney’s official streaming service, in 2020.

Very cool and humbling news in the world of music, our MOANA soundtrack breaks all time record for most weeks at #1 on the BILLBOARDS chart
🎶🪝🙏🏾

Congrats and THANK YOU to our genius maestro, songwriter & composer Lin Manuel Miranda.
You’re one of one, my brother.

And a HUGE THANK YOU to all the families around the globe who made this happen – and listened to me sing in keys that don’t exist…..

Well, Moana wouldn’t be breaking records if it wasn’t for dedicated Disney fans of all ages who continue to love the film’s story and music. What can we say except, “You’re welcome!”

If you love Moana as much as we do, you’re in luck because even more of our favorite wayfinder is coming soon. The titular character herself (played by Auli’i Cravalho) is getting her own animated series on Disney+. Additionally, a new attraction called Journey of Water is coming soon to EPCOT at Walt Disney World Resort! Plus, Moana-themed rooms just recently debuted at Disney World — read more here.

Read the official synopsis of Moana below:

Are you a Moana fan? Let us know in the comments!