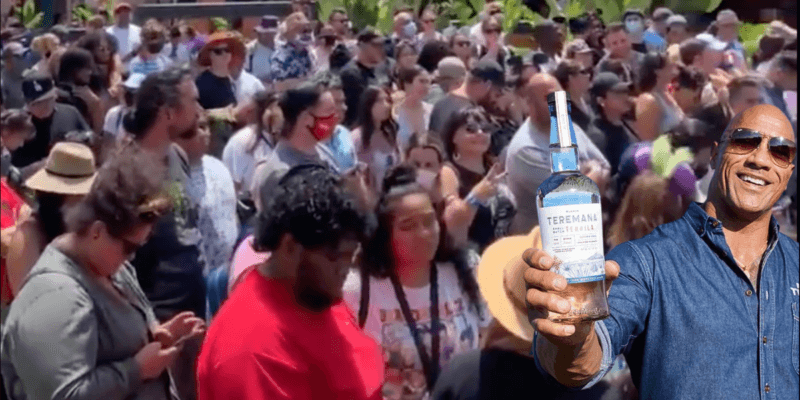 Ahead of the release of one of the biggest summer films, Jungle Cruise, Dwayne “The Rock” Johnson has been going around the country doing press for the exciting new movie. The film is set to premiere at Disneyland Park on July 24, but the actor made an early trip down to the Happiest Place on Earth and brought along his mobile tequila truck.

That right, you read that correctly — his mobile tequila truck. Dwayne Johnson has his own tequila brand, Teremana Tequila, and decided to give Disney fans a free taste of the delicious adult beverage. The truck pulled up outside of Tortilla Jo’s in Downtown Disney and a limited number of fans were given tickets and bracelets for their free samples. Even though the tasting was limited, the number of people given access to Downtown Disney was not, and boy did they show up in droves!

Even the Mana Mobile — the name of the traveling tequila truck — shared a video of all of the fans who showed up, excited to try tequila and see The Rock himself.

The Mana Mobile has arrived in @Disneyland! #ManaMobile

While fans crowded the Downtown Disney area, only a limited number were given tickets to try a piece of French toast and a shot of tequila — quite the combo! Instagram user and theme park blogger Disney Hype Beast shared a picture of their wristband and a little more information on the event.

@therock Mana Mobile is here at Downtown Disney between @tortillajos and @splitsville.anaheim. They are giving out wristbands and 2 tickets right now. The tickets are for a sample of the French Toast and a shot of tequila from @teremana. The event will start at 1pm today.

Jungle Cruise will premiere tomorrow at Disneyland Resort and preparations have been underway for days. Guests visiting Disneyland on July 24 should be aware that there will be no nighttime fireworks show and some rides and areas will be modifying operations  — including ToonTown, Walt Disney’s Enchanted Tiki Room, and, of course, the Jungle Cruise, the ride that inspired the movie.

While the world-famous Jungle Cruise inspired the movie, it is sure to create its own fun spin — much like Pirates of the Caribbean. Here is the film’s official description from Disney:

If seeing The Rock in person wasn’t exciting enough, Emily Blunt also made an appearance in support of her costar.

Jennifer M. (@jennydreamsdisney) had a front row seat at the tequila tasting event and was able to snag both photos and video.

My heart still pounding 100x BPM
❤️❤️❤️❤️❤️❤️
This was such a surreal moment!!
@therock loooovveee youuuu woooooo……
•••••••
He also surprised everyone with a special guest the one and only Emily Blunt!!!!
________
My main reason for today’s trip to downtown Disney was to see my mannnsssss and check out his @teremana mana mobile!

The Jungle Cruise will premiere simultaneously in theaters and on Disney+ with Premier Access on July 30. Tickets and Premier Access are both available for preorder, so you can even make your purchase today!

Will you be seeing The Jungle Cruise when it premieres on July 30? Let us know in the comments!