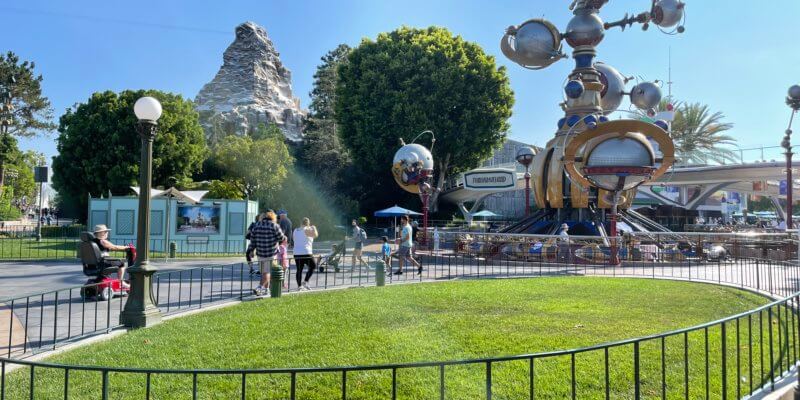 Tomorrowland is getting some futuristic updates at the Disneyland Resort! Disney’s previously announced reimagining of the entrance of Tomorrowland looks nearly complete. Here are the latest updates all about what Disney is doing to Tomorrowland.

Tomorrowland is a fan-favorite land at Disneyland Park, Walt Disney’s original Magic Kingdom in Anaheim, California. The land is filled with amazing attractions (like Space Mountain, Autopia, Buzz Lightyear Astro Blasters, and more) and a fun atmosphere. But there is one element of this land at Disneyland that Guests did not enjoy so much: the French fry rocks.

The interesting rocks — which fans have lovingly and hilariously dubbed the “French fry rocks” — were a part of Tomorrowland that didn’t really fit with the land itself. While Walt Disney World Resort’s Magic Kingdom has its own version of the rocks in Florida’s Tomorrowland, they are purple and fit a bit more with the color scheme of the land. The rocks in California, however, were a tan color and many thought they resembled fries!

Aside from what many felt was an aesthetic issue, the rocks at the Tomorrowland entrance often posed an issue with the walkway. The walkway around the rocks was quite narrow, and navigating around them was often difficult for disabled Guests, Guests in ECVs or wheelchairs, and Guests with strollers. Not only that, but during crowded times of the day, the rocks proved to be quite the obstacle.

Enter Project Stardust. A few years back, Disneyland Resort began what was known as Project Stardust, an effort to make a variety of improvements to the Guest experience at Disneyland. Many of the work that was done as part of Project Stardust involved widening walkways — and one of the projects happened to be the reimagining of the Tomorrowland entrance, including the rocks.

Disney announced the Tomorrowland refurbishment back in 2019:

Imagineers wanted to open up the space and improve access into the land. However, it was important to maintain its overall complexion—with trees and beautiful planters. As shown in this rendering, guests will soon be entering Tomorrowland on a widened pathway lined with elliptical planters that are filled with swirls of colorful flowers.

And now, as of August 2021, the refurbishment looks great so far! While Disney has not yet provided an update recently regarding the Tomorrowland refurbishment progress, we can see from a recent visit to the Park that most of the construction walls are down, the visible rocks have been removed, fenced-in grass is prevalent, and only a small section of walls remains.

According to the concept art, there was more planned for the refurbishment of the Tomorrowland entrance. The art (as seen displayed on the construction wall in the photo below) shows futuristic silver planters with blue and yellow florals. However, at this time, it is not yet clear if Disney will continue that work soon, or if, for now, the area will be simply grass.  Although the area looks great right now, it does seem like it may be a while before the Tomorrowland entrance matches the amazing concept art.

We will keep you posted in the meantime and share updates as we receive them!

’Tis the season for construction at Disneyland! We have covered a few other construction updates on our website for you to check out, including some refurbishments happening at New Orleans Square, Fantasyland, and Cars Land.

What do you think of the Tomorrowland entrance reimagining so far? Do you hope Disney announces more refurbishment projects for Tomorrowland at Disneyland? Let us know in the comments!

Plan your perfect trip to Disneyland by clicking HERE!