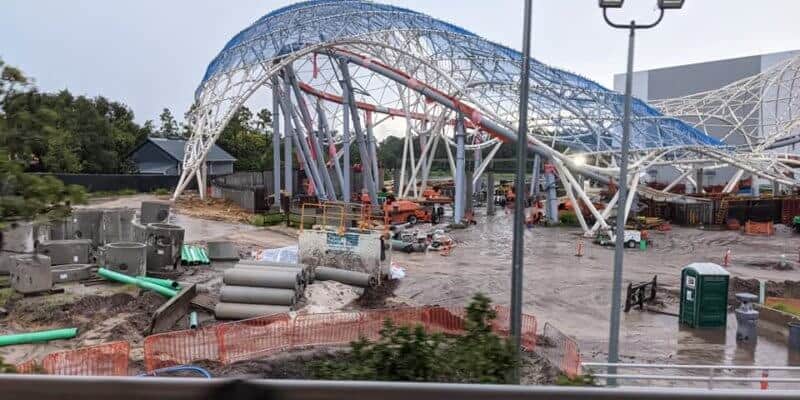 Disney is bringing a futuristic attraction to Tomorrowland at the Magic Kingdom. TRON Lightcycle / Run construction has been slow-moving, but now it appears that it is nearing completion.

See the latest construction photos for TRON as we discuss why the coaster has been a slow project to get off of the ground, and when it may open.

Related:Confectionery Is Cooking Up Something New as Construction Continues

Now, as work has picked back up, Guests can see some major improvements happening at the construction site!

As you can see more of the blue overlay is being added to the exterior canopy of the attraction than before.

If you catch a ride on the PeopleMover in Tomorrowland you will be treated to fantastic views of the ongoing construction of TRON Lightcycle / Run.

It will be exciting to have a new attraction in Tomorrowland as the land is currently suffering from a lack of attractions. Stitches Great Escape closed its doors, and Disney confirmed that the attraction would not be reopening.

Monsters Inc. Laugh Floor is also closed and has not yet received an official reopening date from Disney.  Leaving the two attractions at the entrance of Tomorrowland vacant, and the area feeling lackluster.

Outside of the TRON construction zone, there is other work being done in Tomorrowland ahead of Walt Disney World’s 50th anniversary celebrations, which will begin on October 1. You can read more about that construction work here.

So when will TRON  Lightcycle / Run open? Disney has not given any official opening date for TRON, and looking at the construction my best estimation would be at least another year out. Hopefully, Disney will give fans an update on when they can expect the new Tomorrowland attraction soon.

When do you think TRON Lightcycle / Run will open? Let me know in the comments!