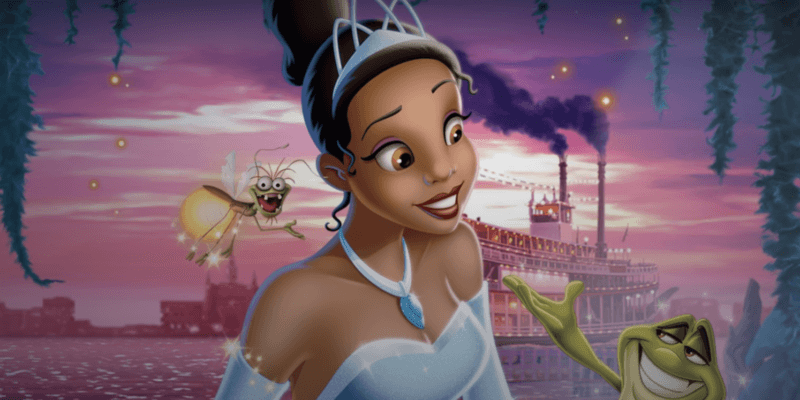 Following the Disney Renaissance in the late 1980s and 1990s — which saw Princess Ariel in The Little Mermaid (1989), Princess Belle in Beauty and the Beast (1991), and Princess Jasmine in Aladdin (1992), Disney Princess fans went years without a new Princess to fall in love with. Then, in 2009, Princess Tiana graced movie screens in The Princess and the Frog.

Related: Disney Hints at ‘Princess and the Frog’ Addition to New Orleans Square

The movie saw a return to the classic style of Disney animation that is seen in beloved classics like the aforementioned Princess movies, plus Snow White and the Seven Dwarfs (1937), Cinderella (1953), and more.

The Princess and the Frog — which will be the new theme of the Splash Mountain log flume rides at both Walt Disney World Resort and Disneyland Resort — is set in New Orleans in the 1920s, and follows the adventures of hard-working Tiana (Anika Noni Rose) as she navigates her dream of owning a restaurant in the Crescent City.

For quite some time, fans of this now-iconic Walt Disney Animation Studios movie have been able to stream the film on Netflix. However, that will be changing this week. As of Thursday, July 15, 2021, The Princess and the Frog will be disappearing from Netflix.

Fortunately for fans of the movie, it is currently streaming on the Disney+ platform as well. The official description on Disney’s streaming service reads:

A modern twist on a classic tale from Walt Disney Animation Studios features a beautiful girl named Tiana (Anika Noni Rose) who dreams of owning her own restaurant. When she meets a frog prince who desperately wants to be human again, a fateful kiss leads them both on a hilarious adventure through the mystical bayous of Louisiana…with the villainous voodoo magician Dr. Facilier (Keith David) in hot pursuit.

The film also features the voice talents of Bruno Campos as Prince Naveeen, Michael-Leon Wooley as Louis the Alligator, Jim Cummings as Ray the Cajun lightning bug, and Oprah Winfrey as Eudora.

Are you sad to see The Princess and the Frog leaving Netflix?

Comments Off on Iconic Disney Movie Disappears From Netflix This Week