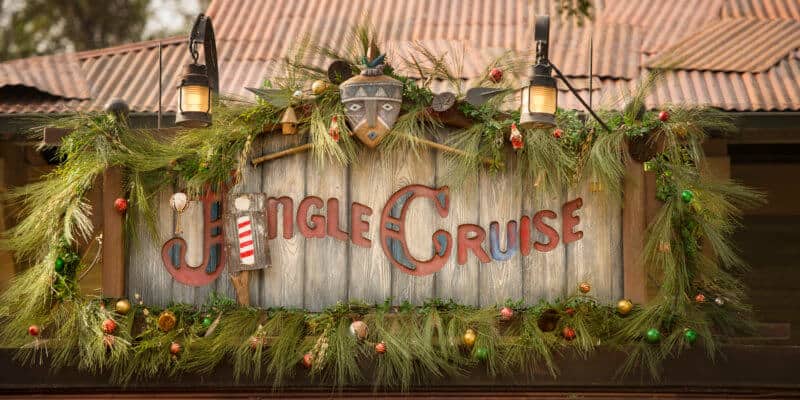 It’s officially halfway to the holidays and Walt Disney World isn’t holding back on its celebrations this year.

This morning, the theme parks announced new and returning offerings that Guests can look forward to later this year. From a brand-new After Hours event called Disney Very Merriest After Hours to the return of EPCOT International Festival of the Holidays, Disney World will be bringing in the holiday cheer like never before.

Another element that is returning to Walt Disney World is special Magic Kingdom attraction overlays!

Per the Walt Disney World website, attraction overlays will return to select Magic Kingdom attractions for the holiday season. At this time, we do not know exactly which attractions will get a holiday overlay for 2021, but we can suspect to see the Jingle Cruise return to Adventureland, the Mad Tea Party turn into its cheerful version, and possibly the Tomorrowland Speedway as this ride has also had a holiday overlay in the past.

Related: No Lights on Cinderella Castle This Holiday Season

It is more than likely if Jingle Cruise were to return, it would return to the theme park during both regular park hours and during the Disney Very Merriest After Hours event. As far as other holiday overlays, including Mad Tea Party, these could be done just for the special After Hours event, especially if the overlay just includes specialty lights and sounds that can be turned off for regular theme park hours.

Inside the Magic will continue to update you as we get information surrounding the holiday overlays at Magic Kingdom.

As far as over attraction overlays go, Disney World Guests can expect to see the Hollywood Holiday Tower Hotel return to Disney’s Hollywood Studios as well as the holiday edition of Tree of Life Awakenings at Disney’s Animal Kingdom.

Which attractions do you hope to see receive an attraction overlay for the holidays? Let us know in the comments below.

If you want to visit Walt Disney World for the holidays, start planning today!