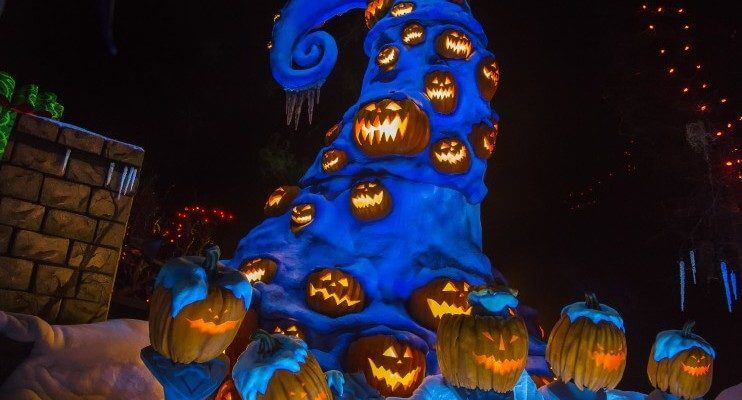 With new holiday entertainment at the theme parks this year, the magic of Christmas collides with competition for guest attendance. The winner in this spirited race is the park visitor, gaining more choices and exciting experiences than ever before.

Over the top entertainment is unwrapped this year at both Universal Studios parks (Florida and California) as well as at a pair of parks at the Walt Disney World Resort in Florida.

Harry Potter takes center stage for a truly spellbinding, magical experience with “The Magic of Christmas at Hogwarts.” This projection-powered overlay to the Hogwarts castle covers both coasts and can be seen at Universal Studios Hollywood and at Universal Orlando Resort (Islands of Adventure) in the Hogsmeade Village areas of each park.

Setting aside the amazing projection shows from Disney and Universal, there are more than a few actual attractions that have received a Christmas overlay. Let’s take a peek at a few of these presents. 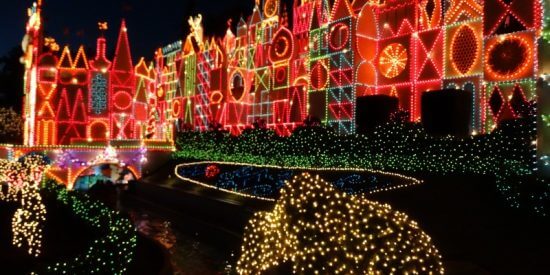 Jack Skellington and his friends began their seasonal spirited soiree at the New Orleans Square Haunted Mansion (California) in 2001 and at the Haunted Mansion in Fantasyland (Tokyo) in 2004. This “Nightmare Before Christmas” whimsical winter wonderland still haunts the Mansion annually and features a new creepy cool gingerbread house each year.

Jest in the jungle is the flavor for this Jungle Cruise overlay. Peppered with presents and Christmas hints throughout the queue and river ride, the holiday overlay is held together by the witty winter storytelling banter of the attractions Skippers. This holiday adaptation first appeared in 2013. The last Jingle Cruise at Disneyland (California) set sail in 2015. The festive fun flows for Christmas at the Magic Kingdom (Florida) again this year.

The infamous World’s Fair import to Disneyland’s Fantasyland area has been delightfully decorated for Christmas every year since 1997. This holiday boat ride ‘round the world also features a customized version of the famous “It’s a Small World” song alternating between the attraction’s theme and “Jingle Bells.”

Gone but not forgotten. Over the years a few of these festive favorites have faded away.

At SeaWorld in Orlando, Florida, the Wild Arctic attraction enjoyed a “Polar Express” overlay (starting in 2007) with scenes from the animated film. Upon reaching their destination, guests disembarked in a true winter wonderland and enjoyed the opportunity to meet Santa Claus. The Santa meet and greet remains, but “Polar Express” left the station for good in 2015.

This holiday hoedown was one of two seasonal overlays that would transform the attraction (a summer adaption was known as “Country Bear Vacation Hoedown” also made brief appearances at the attraction). Christmas with the Country Bears was an annual tradition that began in 1984 at both the Walt Disney World Resort’s Magic Kingdom (FL) and Disneyland (CA). The last overlay was unwrapped in 2000 in California and in 2005 in Florida.

Seeing the magical make-overs at favorite attractions is a fresh, fun, and festive way to enjoy the holidays (especially the Haunted Mansion Holiday –for me, at least). It’s always fun to see how the Christmas season is interwoven into an attraction. Will we see “Life Day” make an appearance at forthcoming “Star Wars” lands? 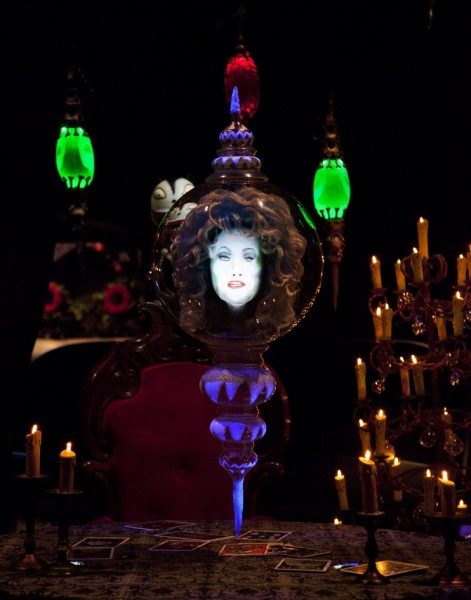 Do you have a favorite festive ride overlay that you enjoy at Christmas?  Please share your memory in the comments below.