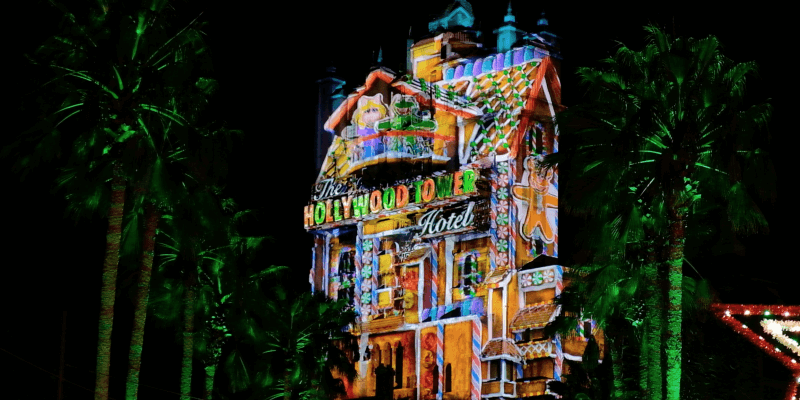 Disney’s Hollywood Studios just previewed new Flurry of Fun celebrations coming to the park, which is said to be a holly, jolly celebration brimming with magical merriment! Some of the celebrations previewed included the new nighttime projection show Sunset Seasons Greetings, which features characters from “Frozen,” “The Muppets,” and “Toy Story!”

Walt Disney World loves to surround its guest’s in a land of winter wonder during the holiday season, with beautiful decorations to be found at each of the parks. And to complement these already stunning decorations, Disney throws special holiday shows into the mix and these can get anyone into the Christmas spirit!

During this new projection show, billboards begin to move around the park and iconic Disney characters appear on the Tower of Terror. Some of the show’s scenes include Mickey and Minnie reminiscing about a hometown Christmas, “Toy Story” characters guessing which new toys are coming this Christmas while looking over wrapped gifts, The Swedish Chef from “The Muppets” babbling and Olaf from “Frozen” pining over his holiday wish while iconic music plays. The Frozen scene also includes dancing Aurora Borealis lights and projected falling snow.

Each section of the show begins on the moving billboard and then is followed by a scene projected onto the tower. The full show is a combination of all the scenes put together into one big Christmas treat! Sunset Seasons Greetings nighttime projection show will premiere this year at the park on November 9 and run through December 31, 2017.