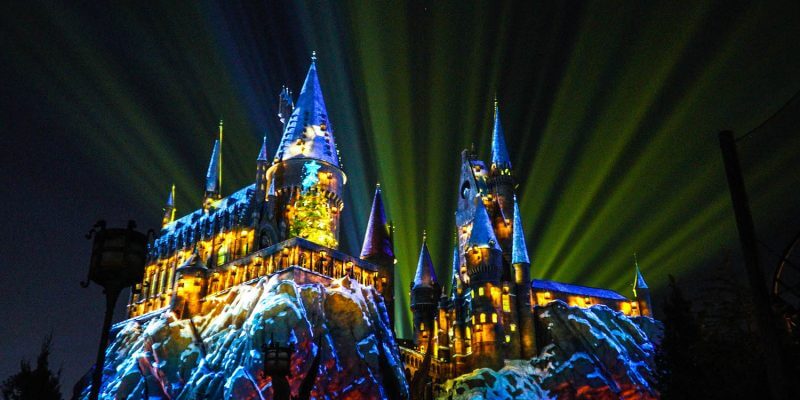 For the first time at Universal Orlando, the holidays have come to the streets of Hogsmeade and Diagon Alley as the Wizarding World of Harry Potter lights up with new magic.

Christmas decorations, garlands, and lights line the streets of the Harry Potter-themed areas of both Universal Studios Florida and Islands of Adventure. While the Wizarding World’s wintery scenery is beautiful year-round, it truly shines like never before with the festive additions.

Easily the highlight of each evening is the holiday transformation of Hogwarts castle by way of a new projection mapping show called “The Magic of Christmas at Hogwarts.” In the show, the castle illuminates via twinkling lanterns and the glow of fairies, along with plenty of antics from Hogwarts students, including the Weasleys adding a bit of humor to the entirely beautiful show.

WATCH: ‘THE MAGIC OF CHRISTMAS AT HOGWARTS’ PROJECTION SHOW AT UNIVERSAL ORLANDO

There’s a wonderful subtlety to this new show, offering an authentic feel to the digital holiday overlay. None of the dazzling visuals or over-the-top antics are done without reason. They all make perfect sense, as if onlookers are truly standing in Hogsmeade watching it magically transform before their eyes.

Backlighting, spotlights, twinkling multi-colored lights in the trees, and a bit of pyrotechnics all serve to enhance the projection show in the best possible ways. It’s vibrant, engaging, and entirely mesmerizing – a perfect addition for the Christmas season. Throughout Hogsmeade Village, holiday lights and garland adorn each shop and restaurant, brightening the snow-capped buildings with some holiday cheer. It’s not a huge addition to the area, but just enough to call it Christmas. Likewise, over in London and Diagon Alley at Universal Studios Florida, more white lights and garland – along with a few Christmas trees – have popped up to overlay the area with an appropriately festive look. Coupling the projection show with the new holiday performances from the Frog Choir and Celestina Warbeck and the Banshees, there has never been a better reason to visit (or revisit) the Wizarding World than now.

In addition to the new excitement in the Wizarding World of Harry Potter, Macy’s Holiday Parade has transformed into Universal’s Holiday Parade featuring Macy’s, an all-new and much-improved version of the classic street parade. Plus, the Grinch is back at Islands of Adventure with the ever-popular Grinchmas celebration. And Mannheim Steamroller returns to Universal Studios Florida with a series of nighttime concerts.

The holiday season at Universal Orlando officially kicks off Saturday, November 18 and continues through January 6, 2018.