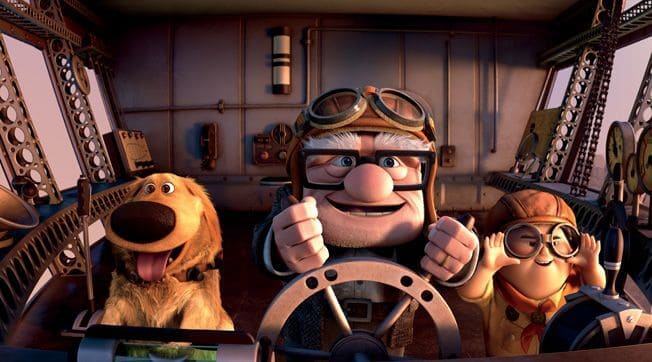 Muntz was a world adventurer and had, in fact, extensively explored Paradise Falls. He was the reason Carl and his wife Ellie wanted to visit the stunning South American location.

Finally, when Carl and Russell take their unexpected journey to Paradise Falls, they happen upon Muntz and his famed Spirit of Adventure blimp.

No matter how many times you’ve seen Up, there’s one thing you probably haven’t noticed about Muntz’s vessel, though — it’s actually a reference to another very famous ship from the Star Wars universe. As the Pixar Fandom Wiki notes:

…[The Spirit of Adventure] mirrors the Empire fleet ship from the original trilogy, and when his dogs are told to take down the house, they parody the Red-5 scene in A New Hope.

The Imperial ship being referenced is Sith Lord Darth Vader’s flagship Star Dreadnought, the Executor. The Dark Lord’s ship is described as:

One of the largest and most powerful Imperial vessels ever created, the Executor was 19,000 meters long,[3] eclipsing its escorting Imperial-class Star Destroyers,[13] and boasted more than 5,000 turbolasers and ion cannons. The center of her arrowhead-shaped hull was covered by a city-like superstructure, while the underside hosted most of the engineering systems.

As the Wiki points out, the interior of the Executor, in particular, mirrors the appearance of the Spirit of Adventure. The subtle nods to the Star Wars villain’s famous starship could have been Pixar’s way of cluing in astute Up moviegoers before the end of the film — Muntz wasn’t the good guy after all, and his dirigible proves it.

As most Up fans know, this isn’t the only Star Wars Easter egg in the 3D animated movie The credits feature various snapshots of Carl and Russell after they return from Paradise Falls, one of which showcases the duo at a Star Wars movie. Up, of course, came out three years before The Walt Disney Company purchased Lucasfilm, Ltd. from Star Wars creator George Lucas in 2012.

Both Pixar fans and Star Wars fans have long believed this photograph might have been a way of letting viewers what was coming before Disney’s Star Wars sequel trilogy was officially announced.

More about Pixar’s Up

Related: Mother Gothel Made One Crucial Mistake in ‘Tangled’

You can watch Up streaming anytime on the Disney+ streaming service. The official description of the popular Pixar film reads:

Carl Frederickson, a retired balloon salesman, is part rascal, part dreamer and ready for his last chance at high-flying excitement. Tying thousands of balloons to his house, Carl sets off to see the lost world of his childhood dreams. Unbeknownst to Carl, Russell, an overeager 8-year-old Wilderness Explorer who has never ventured beyond his backyard, is in the wrong place at the wrong time…Carl’s front porch. The world’s most unlikely duo reach new heights and meet fantastic friends like Dug, a dog with a special collar that allows him to speak and Kevin, a rare 13-foot tall flightless bird. Stuck together in the wilds of the jungle, Carl realizes that sometimes life’s biggest adventures aren’t the ones you set out to have.

Do you think Pixar’s animators were trying to foreshadow Muntz’s villainy by basing his Airship on Darth Vader’s?