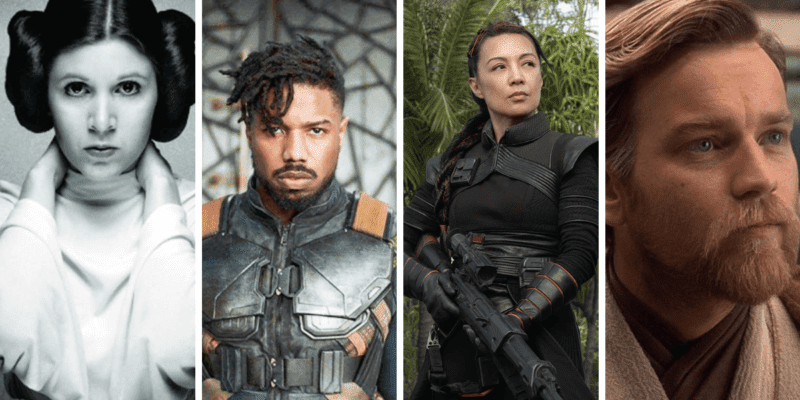 More Hollywood stars are getting Hollywood stars! The 2022 honorees for the Hollywood Walk of Fame have just been announced, and among them are a few Disney, Star Wars, and Marvel stars: Michael B. Jordan, Ewan McGregor, Ming-Na Wen, Tessa Thompson, and the late Carrie Fisher.

Related: Fans Want Cameron Boyce to Get a Star on Hollywood Walk of Fame

Wen shared her excitement for the news on Instagram:

My reaction to the news:
⭐️not sinking in.
⭐️My QUEEN #CarrieFisher doesn’t have one yet? HOW?!!
⭐️AND, I’m one of her alums now?!
⭐️WITH #ewanmcgregor?!!
⭐️NERDGASM TO THE MAX
⭐️Still not sinking in.
⭐️My galpal @hollyrpeete the first to tell me. She texted “⭐️?⭐️?.” I texted back, “What the stars mean?” I had no idea what she meant. She could NOT believe I didn’t know. Funniest call. So happy for her! Congrats, Holly!!! Our husbands were cheering us on! Love them both!❤️?
⭐️In shock.
⭐️Sooooo happy for #JamesHong! He deserved a star years ago!????
⭐️Big congrats to all the recipients!
⭐️Really grateful
⭐️Gotta call mom. She won’t understand why it’s a big deal.

Many would agree that Fisher being honored with a star on the Walk of Fame is a long time coming. A few years back, Star Wars co-star Mark Hamill strongly advocated for Fisher to get a star. However, the rule states that there must be a five-year wait for an entertainment professional to be honored posthumously. Fisher passed away in December 2016, and, as this year will mark five years since her death, she will be able to be honored on the Hollywood Walk of Fame as part of the Class of 2022.

Carrie WILL get her well-deserved Star on the Walk of Fame, it’s only a matter of when. The rule is a 5-year wait when awarded posthumously. A letter to the Hollywood Chamber of Commerce wouldn’t hurt, urging them to time it to the release of #EpIX⭐️
#AlwaysWithUs

Carrie WILL get her well-deserved Star on the Walk of Fame, it's only a matter of when. The rule is a 5-year wait when awarded posthumously. A letter to the Hollywood Chamber of Commerce wouldn't hurt, urging them to time it to the release of #EpIX⭐️#AlwaysWithUs pic.twitter.com/CVMX1csDwJ

The full list of 2022 Hollywood Walk of Fame honorees is as follows, according to the official press release:

In the category of RADIO: Richard Blade

In the category or Sports Entertainment: Michael Strahan

Note that dates have not yet been scheduled for these star ceremonies.

Are you excited for Carrie Fisher, Michael B. Jordan, Ming-Na Wen, and Ewan McGregor to be honored on the Hollywood Walk of Fame? Which other entertainers are you excited to join the list of honorees? Which Hollywood star do you think should be honored next? Let us know in the comments!

Comments Off on Carrie Fisher, Michael B. Jordan, & More Getting Stars on Walk of Fame!