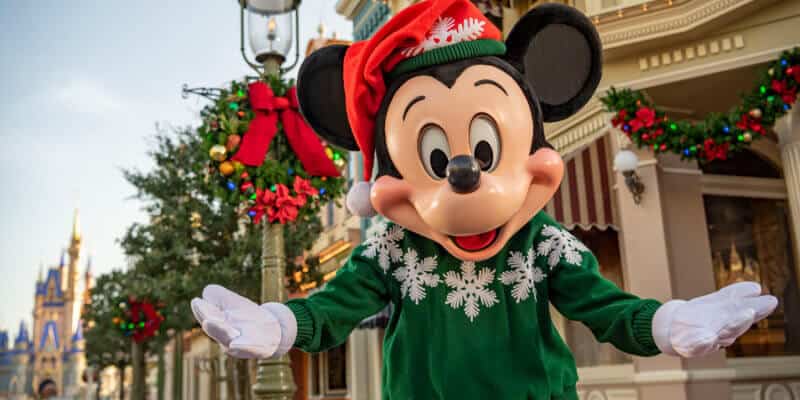 The Walt Disney World Resort will be celebrating its 50th Anniversary starting October 1, 2021. This celebration will span over a year and bring special decorations and offerings around the theme parks.

How will the 50th anniversary change the way the holiday season is celebrated at Walt Disney World? Let’s take a look!

Given that the 50th Anniversary will begin on October 1 this year, what impact will that have on Christmas at the theme parks, specifically Magic Kingdom? For clues as to what Guests can expect from a Christmas vacation during the 50th Anniversary, we can look at how Disney is changing Halloween offerings this year.

Disney has confirmed that special decorations will be added to Magic Kingdom that both represent Halloween, but also reflect the EARidecent color scheme that represents the 50th Anniversary of Walt Disney World.

As you likely know, Mickey’s Not-So-Scary Halloween Party is being replaced by the Disney After Hours Boo Bash event this year. This event will not offer Halloween-themed fireworks, shows, or parades, which is a big change from previous Halloween celebrations at the Magic Kingdom.

While Halloween is receiving a much smaller celebration at Magic Kingdom this year, will the same be said for Christmas?

Last year due to the ongoing pandemic, Christmas at the Magic Kingdom was greatly reduced. The oversized Christmas tree and decorations could be found, but no lights were hung on Cinderella Castle. Mickey’s Very Merry Christmas Party was canceled, and the parade, shows, and fireworks were also absent last year.

Disney opted to add a projection show to Cinderella Castle in place of the traditional lights last year, and it is likely that Disney will do this again for 2021 given that Cinderella Castle is covered in special decorations for the 50th anniversary.

At this time, Disney has not stated if Mickey’s Very Merry Christmas Party will return for 2021. We also do not know if the Christmas decorations will receive the same treatment as the Halloween decorations, and reflect the EARidescent color scheme of the 50th anniversary.

Christmas will not be canceled at the Magic Kingdom, but like with Halloween, we could see different offerings this year. We do anticipate the Hotels across Disney World property to still deck the halls, as well as the iconic oversized Christmas trees that are typically on display at EPCOT, Animal Kingdom, and Hollywood Studios to still be put up this year.

We will have to wait for more information from Disney in the coming months leading up to the holiday season as to what we can expect for Christmas at Magic Kingdom this year.

Disney is gearing up to celebrate the 50th anniversary of the Walt Disney World Resort in a big way.

There will be new nighttime spectaculars debuting at both Magic Kingdom at EPCOT. Disney’s Animal Kingdom is getting a brand new daytime show for the 50th anniversary.

What do you think? Will Mickey’s Very Merry Christmas Party return? Let us know in the comments!