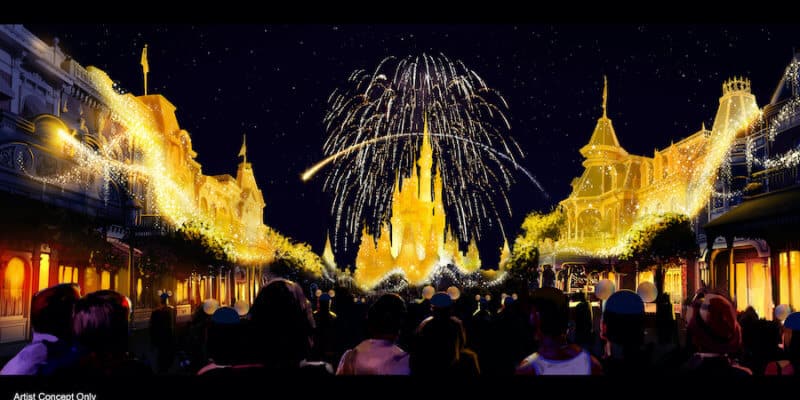 Main Street, U.S.A., is about to be more shining, shimmering, splendid than ever before! Disney has officially confirmed that, for the first time ever, Magic Kingdom will be getting projections on the buildings of Main Street, U.S.A., as part of the all-new nighttime spectacular coming for Walt Disney World’s 50th anniversary, Disney Enchantment.

Disney officially confirmed the all-new projections in an announcement on Disney Parks Blog on Tuesday:

Take a closer look at the concept art below:

Over on the west coast, the Disneyland Resort fireworks shows nowadays include immersive projections on several Park landmarks, including Main Street, U.S.A., “it’s a small world,” the Matterhorn, and of course Sleeping Beauty Castle. Many fans love switching up their go-to firework viewing spot in order to see the various projections. Disneyland Forever, introduced for Disneyland Resort’s 60th anniversary in 2015, brought to life beloved Disney stories, and the projections were part of that.

Now that Magic Kingdom is introducing projections to Main Street, U.S.A., as part of the new firework show coming for the 50th anniversary, it looks like fireworks at Walt Disney World are going to really level up. If you love the projection mapping on Cinderella Castle during Happily Ever After, we suspect that projections on Main Street, U.S.A., will elevate your firework viewing experience that much more.

Disney hasn’t provided any other details pertaining to the new projections at Magic Kingdom, but we will update our website as soon as more information is released. For now, get excited about Walt Disney World’s 50th anniversary celebrations, which will last for 18 months beginning on October 1, 2021.

Are you excited for the projections that will illuminate Magic Kingdom for the 50th anniversary? Let us know in the comments and click here to book a trip for the World’s Most Magical Celebration!