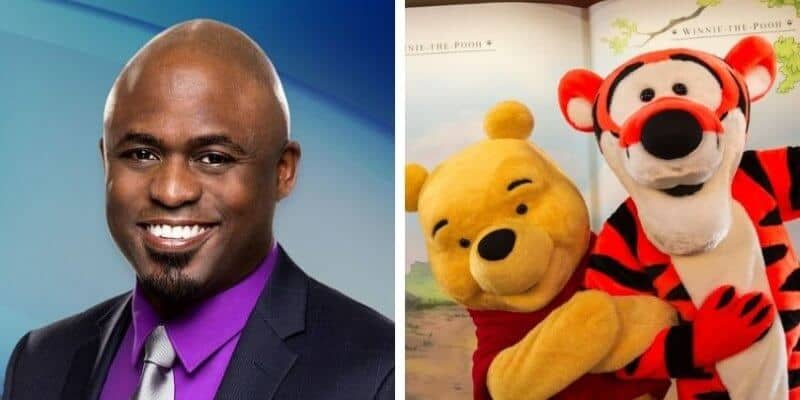 Actor, comedian, and Let’s Make A Deal host Wayne Brady used to work in the entertainment department at Walt Disney World in Florida, but did you know that the actor was also fired from the company…for something he didn’t even do?

Related: We bet you didn’t know these celebrities used to work at Disney Parks

Wayne Brady is known for hosting Let’s Make A Deal, appearing on Whose Line Is It Anyway?, and most recently, winning The Masked Singer. But before his professional career really took off, the actor and comedian once worked at the Most Magical Place on Earth.

According to Playbill, as a teenager, Brady started his professional career as a character performer at Walt Disney World, but it wasn’t always smooth sailing for the comedian:

His very first time as Tigger was during a parade and he really wanted to give it his all. He was running around, breakdancing etc and, unfortunately, “giving your all” in an all-encompassing costume/mask in blazing Florida heat led to him passing out! All he remembers is dancing and then he wasn’t. And then was screaming because he couldn’t see anyhintg! Was he blind? No. When he fell, he broke his chin strap and his mask turned around so there were no eyeholes! He basically had heat stroke and passed out. There were no long term effects, but he said he feels bad for the kids who are now adults and have sever issues from what he calls “seeing Tigger die on Main Street.”

After this unfortunate incident, Brady continued with the company and was eventually cast in a show called Rap’n Roll, which used to take place in Tomorrowland at Magic Kingdom. He was about to start rehearsals when a close friend of his, Chris Judd, asked Brady to sub in for him for the day.

Well, this time around, Brady was trying to follow the rules and handle a disgruntled Guest while in full character costume as one of the Hundred Acre Woods characters. One mother wanted her son to take a photo with the Winnie the Pooh character, but there was a long line for the meet and greet. Trying to be fair to everyone, Brady (still in costume) tried to motion to the Guest that they must wait in line, which the Guest did not like. Per Playbill:

He was on Main Street, smiling and posing for photos and suddenly he got aggressively tapped on his shoulder. He turned around and a woman told him that her son wanted a photo with him. Right now. Well, there was a line and Wayne didn’t feel it was fair to do a photo with someone who hadn’t been waiting. So, first he waved at the kid and hugged him and then he indicated (through mime, because he was not allowed to talk) that she should wait in line. He turned around and she tapped aggressively again. He turned around and she told him that she was a bigwig in the park in the park and therefore he should do the photo. Well, Wayne had memorized the rulebook and this woman, while indeed a bigwig was, in fact, not allowed to get preferential treatment. She then angrily pointed at him in a “I’m going to get you” way and sassed away. Hilariously, as she stormed away, she realized she forgot her own child! She ran back, grabbed her kid and left.

The Guest was not happy with that response and tried to get Brady in trouble by accusing him of pinching her son — something Brady did not do. In fact, he couldn’t have with the constraints of the costume, however, Disney still suspended the actor from the company, ruining his chances of rehearsing in Rap’n Roll. Playbill’s report continued:

After Wayne’s shift, he was called into his boss’ office and written up for pinching a child! Not only did it not happen, but it would have been impossible because Tiger’s hands are basically oven mitts. They cannot perform the function of pinching! Regardless, he was suspended from Disney World. Through tears, he asked if he could still start rehearsing Rap’n Roll… and he was told NO. Wayne was suspended and then fired! Three years later, he was cast as an improviser at an in-house Disney theatre in Florida. Before he begins, they tell him that they checked his records and he’s a “no rehire”! That’s right. Just like they threaten in high school, his fake pinching incident was on his “permanent record”!!!

But that’s not all because just when you thought the story was over, another shocking event happened. After his time at Disney World ended, Brady eventually landed a gig with Whose Line Is It Anyway? on ABC, and ABC’s parent company is Disney. Because of this, Brady was invited to a millennial celebration at the theme parks. When he arrived, he was presented with his guide, who, much to his surprise, was the woman who got him fired!

Even though this was a shock to Brady, in the end, he decided to thank her. If it weren’t for her, Brady wouldn’t have ended up with this big career that he has today. The actor explained that back in the day, he had very small views for his career, but after he was fired, he had no choice but to start venturing out and applying for other gigs — which, of course, led him to achieve television success.

Related: Celebrities Who You Won’t Believe Worked at Disneyland

You can catch Wayne Brady as the host of Let’s Make a Deal on CBS or on the new game show, Game of Talents, on FOX.

Did you know Wayne Brady once worked at Walt Disney World? Did you also know he was fired? Let us know in the comments below.

Comments Off on Did You Know Wayne Brady Was Fired From Disney World?