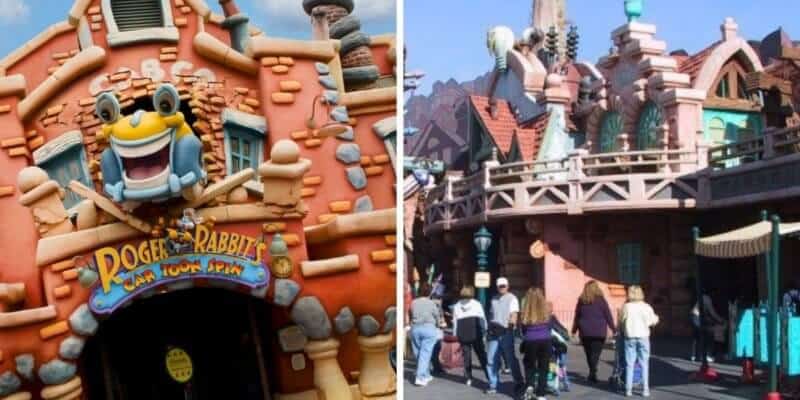 Disneyland is filled with different and unique attractions, perfect for any family. From Peter Pan’s Flight to Jungle Cruise, the theme parks offer magical experiences for all Guests. But have you ever wondered how Disney Imagineers come up with ideas for attractions?

Well, they go through a very long, thought-out process until they reach the end result. And sometimes, that end result does not even remotely match the initial ride concept!

One example of this is Roger Rabbit’s Car Toon Spin in Toontown in Disneyland Park in Anaheim, California.

For starters, in case you aren’t familiar, Roger Rabbit’s Car Toon Spin is based on the movie Who Framed Roger Rabbit, which Disney+ describes as:

While aboard the Disneyland ride, Guests will catch a taxi and follow Roger Rabbit and Benny the Cab as they race through Toontown looking for Jessica Rabbit. Of course, along the way, Guests will have to watch out for those pesky Weasels and the iconic toon-melting dip.

DisneyRemnants shared a handful of photos to Twitter along with the caption:

Originally it was planned for Roger Rabbit’s Car Toon Spin at Disneyland to have two floors! Sadly, the ride system wasn’t able to handle it, so the idea was scrapped. However, you can still see the second floor that guests would have traveled to disguised as the Glass Factory!

Originally it was planned for Roger Rabbit's Car Toon Spin at Disneyland to have two floors! Sadly, the ride system wasn’t able to handle it, so the idea was scrapped. However, you can still see the second floor that guests would have traveled to disguised as the Glass Factory! pic.twitter.com/bVtcTISBcr

— Remnants of Forgotten Disney (@DisneyRemnants) May 5, 2021

Personally, I think it would have been really cool to have two floors within Roger Rabbit’s Car Toon Spin as this would have added a unique experience to the ride, however, the end results are still amazing as it offers fun for the whole family.

Did you know that Roger Rabbit’s Car Toon Spin was originally supposed to have two floors? Let us know in the comments below.

If you want to travel to Disneyland to take a spin on Roger Rabbit’s Car Toon Spin, start planning your trip today! Click here to get started.