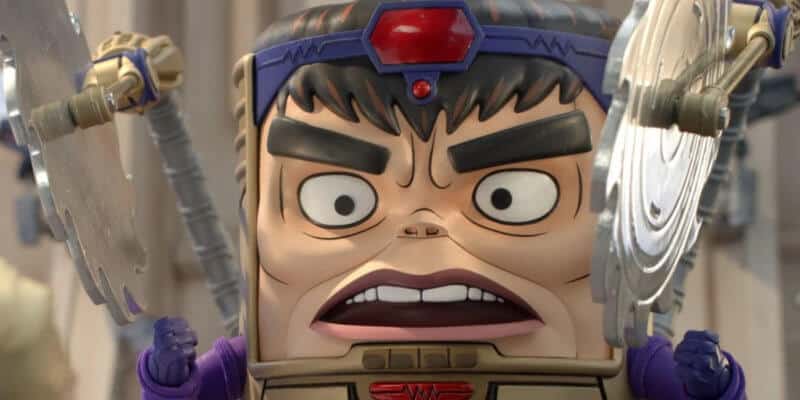 As cool as M.O.D.O.K. is, the character is technically not part of the Marvel Cinematic Universe…at least, not yet. The new claymation series M.O.D.O.K., premiering on Hulu May 21st, lives in its own world — literally.

“Our show was given its own numbered reality: We are Earth-1226, which is my son’s birthday. We are canonically part of the Marvel Multiverse, and it’s up to them if they want to bridge us or not,” showrunner Jordan Blum, who created the show along with comedian Patton Oswalt, told Inverse.

Oswalt, who already has a history with Marvel as a former cast member of Agents of S.H.I.E.LD., voices the beloved anti-hero whose name stands for Mobile Organism Designed Only for Killing. Given Oswalt’s ties to Marvel TV, it seems natural that maybe we can expect a crossover of sorts…right?

Well, maybe. It’s definitely something we shouldn’t count out. If Marvel has shown us anything, it’s that expecting the unexpected when it comes to shows and movies and characters is the norm. More importantly, WandaVision officially introduced the multiverse to the MCU, and next year, it will give us two movies that bring the multiverse to full fruition: Spider-Man: No Way Home and Doctor Strange in the Multiverse of Madness.

Both of these movies are perfect vehicles to introduce the idea of a crossover with M.O.D.O.K., even if it’s just a dropped line to set the stage. And the character is a pretty formidable distraction for the Avengers — he’d make a fun villain no matter where he showed up.

Blum and Oswalt are also open to their show crossing into the Multiverse, should Kevin Feige decide to come calling. Even though M.O.D.O.K. isn’t airing on Disney+, there’s still a chance to see the character in the MCU. New heroes are popping up all the time, and Marvel is pulling from every corner of the universe to satisfy fans and build the best story possible. And with the way the live-action shows and films are starting to meld — shows like What If? will feature animated characters — it’s not out of the question that down the road, we could see an integration.

At any rate, Oswalt and Blum are already prepared for the opportunity. The two have written a comic called M.O.D.O.K.: Head Games, which was released last year and openly addresses the potential for M.O.D.O.K. to cross over. And we’d love to see Stephen Strange or Peter Parker’s face if he just showed up in the middle of battle.

We know anything is possible…thanks to the Multiverse.

What do you think the odds are of seeing M.O.D.O.K. in the MCU?

Comments Off on Could M.O.D.O.K. Cross Over Into the MCU?