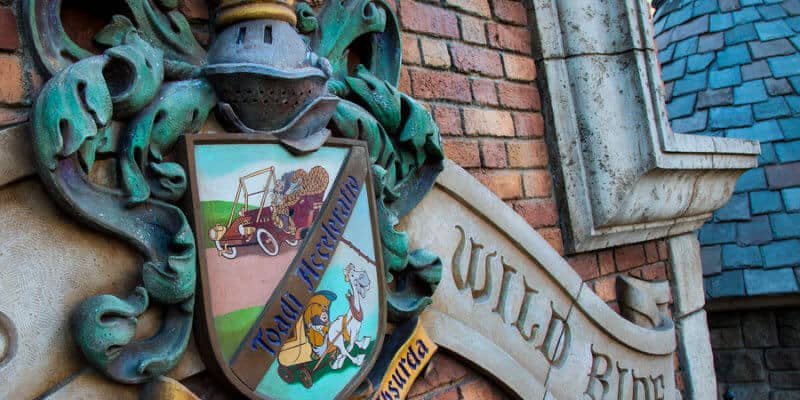 Disney fans are passionate and opinionated people, and I admit, I am one of them. The truth is, many of us grew up watching classic Disney films and visiting Disney Parks since we were young, creating an obsession with Disney. And one thing is for sure when it comes to nostalgic and classic Disney attractions, Disney fans feel the need to speak up and voice their opinion.

Today we share an attraction that has caused a rift between Disney lovers and tends to be a very popular conversation between Disney friends — Mr. Toad’s Wild Ride.

This Disney attraction opened in 1955 when Disneyland first debuted. Inspired by the animated film The Adventures of Ichabod and Mr. Toad, this Disneyland attraction became a very popular dark ride, which then inspired Walt Disney World to do the same and bring this ride to reality in Orland, Florida.

However, Mr. Toad’s in Walt Disney World did not last as long as Disneyland’s has (it was at Magic Kingdom for just about 27 years) before it was replaced by The Many Adventures of Winnie the Pooh. Meanwhile, in Disneyland, Mr. Toad’s Wild Ride remains open and fans are always seen lined up to experience this attraction.

For those who are unaware and are asking what exactly Mr. Toad’s Wild Ride is, per Disneyland’s official website:

Should Mr. Toad’s be replaced? Fans speak out!

Disney’s fanatics have brought up this discussion for many years. Since this dark attraction was replaced in Walt Disney World, many Disney visitors have begged for it to be brought back to the Most Magical Place on Earth. However, on the other hand, some have a different opinion and encourage Disney Imagineers to produce new and reimagined attractions to Disney parks.

Today, we are taking a look at what fans of Inside the Magic are saying regarding Mr. Toad as they spoke up and demanded their voice to be heard! That being said, we received a massive amount of Disney fans pleading their case why Mr. Toad’s Wild Ride should not be reimagined and stay alive in our beloved Disney Park.

I hope Mr Toad stays! It’s not the best ride by any stretch but it gives you a feeling of nostalgia that you’re riding something that was there since the beginning!

Another ITM reader Paul B. shared a touching memory stating:

Mr Toads is a OG ride that has been there from the beginning. Leave it alone if gives people a look back at when the park opened and for me my dad was there on opening day and rode that ride. He is no longer with us so when I go I feel like my dad is riding with me.

Over on Facebook, one Inside the Magic follower Richard H writes:

How about no? How about the fact that this is an original D-land attraction and has to stay? Not to mention the fact that generations of kids were introduced to Toad and friends through this ride before they even saw “The Adventures of Ichabod and Mr Toad”. The long lines for this ride say it all, not that such a fact matters these days, am I right?

The hell part did not scare me at all when I was a kid. I actually appreciated the heat on a cold day. If Mr. Toad’s Wild Ride is removed, that will be the downfall of Disneyland.

Although Mr. Toad driving through hell could be scary to some young children, other Disney attractions such as The Haunted Mansion also shares an eerie and scary Disney theme and clearly has a massive following with both children and Disney adults to this day.

This nostalgic dark ride has created memories for many, but some Disney fans have a different opinion.

Fans Call for Mr. Toad’s to be reimagined

Although Mr. Toad’s Wild Ride is a very cherished ride in Disneyland, some Disney visitors shared how Disney Imagineers should take this ride to the next level.

Honestly, it’s a classic ride, but it’s not a popular one. I think they should change it to something else. Like splash mountain. My kids don’t know who Mr. Toad is. It might be more fun if they change it and update it to another classic movie.

And Inside the Magic follower Michelle A. expressed how she wants a Ratatouille ride, just like EPCOT in Walt Disney World is getting:

I love Mr Toad!! It’s a classic ride for sure! But maybe the Ratatouille ride would be fun?!!!!

These ideas sound intriguing, but keeping Mr. Toads Wild Ride in Disneyland with an updated glow might be the answer. Recently, Snow White’s Scary Adventures was just reimagined to into Snow White’s Enchanted Wish and has received a welcoming response yesterday as Disneyland opened its gates after being shut down for over 400 days. The Jungle Cruise is also on the verge of a revamp in Disneyland and Walt Disney World, and Disney fans agree maybe Disney Imagineers should give this Disney ride a new refurbishment.

ITM Facebook follower Michael J. explained that an update could be the way to go:

This was my favorite ride when I visited the first time as a first grader. Riding it now as an adult, I will admit it is a pretty weird ride especially for kids today who don’t read Wind in the Willows. I hope they can keep it Mr. Toads and maybe just change up the inside like they are doing with Snow White. They got rid of Mr. Toad’s at Disneyworld and people still miss it to this day.

Mr Toads is one of the only Fantasyland attractions that I regularly still enjoy. Just update the effects, or get them working again, and then leave the attraction alone.

Personally, I am partially on both sides. The feeling of riding this nostalgic attraction that Walt Disney once rode with his family is magical, but I do understand how Walt always looked forward to the future of his parks and reimagined attractions throughout generations.

Disney strives on the importance of moving forward and embracing new stories. Regardless, we will all have personal opinions and what we love is how strong the Disney community really is!

It is important to note that Disney has not stated that Mr. Toad’s would be receiving any updates or revamps at this time. Inside the Magic will update you as we get information surrounding the happenings at the Disney Parks.

What do you think? Let us know your thoughts in the comments below!

Are you planning a Disney vacation and need advice? Our friends at Academy Travel are EarMarked Diamond.