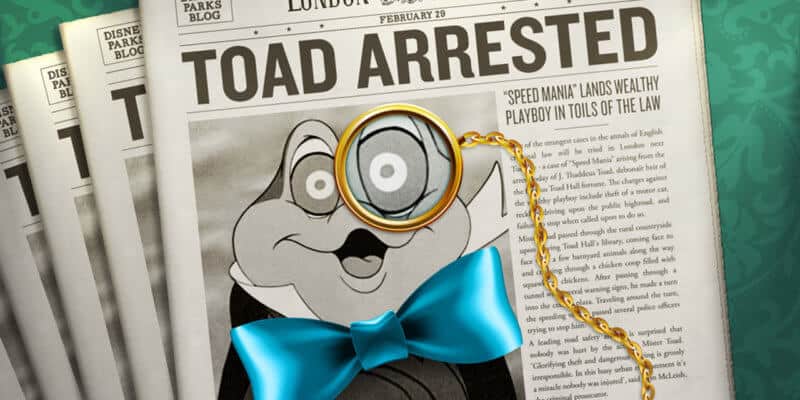 It’s been a wild ride for Mr. Toad. Once the star of his own Fantasyland ride that mirrored its original sibling from Disneyland Park, Mr. Toad can still be found at Walt Disney World Resort…if you know where to look.

Mr. Toad was the star of his own 1949 short film, coupled with the Legend of Sleepy Hollow in The Adventures of Ichabod and Mr. Toad. As Disneyland Park opened in 1955, the story of Mr. Toad was still a popular one, leading Imagineers to create an opening day attraction in his name.

Magic Kingdom opened in 1971 with a (fairly close, but with more tracks) duplicate of this attraction, but after its removal in the late 1990s, Mr. Toad has been a hard character to find on the East Coast.

Where to Find Mr. Toad in Walt Disney World

Mr. Toad’s Wild Ride (on both American coasts) was a story-based attraction, but the dark ride was not a direct copy of his movie. Instead, it was an interpretation of it.

You, as the Disney Guest, were put into Mr. Toad’s situation: choosing to go on a wild ride in a motorcar ride vehicle and making some Mr. Toad-like decisions, but ending the ride with an unfortunate ending via demons and death. This reporter remembers being scared to death at the age of 6, riding the attraction, and then when passing it above in the (now extinct) SkyWay, vowing to never ride it ever again.

Unfortunately, I got my wish in 1998, when the ride was removed as the New Fantasyland expansion/revision started. After 20,000 Leagues Under the Sea was removed, Pooh’s Playful Spot Playground took its place. Later on, Pooh and Piglet’s tree was uprooted and moved to the area in front of Mr. Toad’s wild ride, when it, itself, was removed in favor of The Many Adventures of Winnie the Pooh.

The Many Adventures of Winnie The Pooh

In true Imagineer form, no ride ever completely goes away. Historic touches and hidden characters hide among existing rides and shops every day, waiting for us to discover them. Mr. Toad goes, for the most part, completely unnoticed by most Disney Guests.  If you visit The Many Adventures of Winnie the Pooh in Fantasyland, you can spot a few special portraits in Owl’s house. As you load into your honeypot and enter Owl’s blustery tree house, look around you at all the portraits.

There are no less than two references to Mr. Toad and his Wind in the Willows pals in this room!  On your left hangs a commemorative portrait of Mr. Toad handing over the deed to this attraction property to Owl. The rolled papers have tiny lettering on it to prove the point!

Secondly, on the floor to your right as you exit the scene is a pile of framed photos. You’ll see Pooh Bear accepting a visit from Mole, a main character in Mr. Toad’s tale of caution.

Poor Mr. Toad. Perhaps that last wild ride finally did him in. Either that or the Imagineers had a little fun with his going extinct in the late 1990s. Looking to your left as you exit the right (the ghost horse and doom buggy is usually on your right), you’ll see the Pet Cemetery with all sorts of animal graves. Peek to the upper back left and Mr. Toad ought to shine forth in patina-ed copper glory.

According to PopSugar, (and other internet rumors), his epitaph reads,  “Here lies Toad, it’s sad but true. Not nearly as marketable as Winnie the Pooh.” There does appear to be a very tiny inscription at the base of his stone. I would love to climb up into the area and see if that’s really true!

When you want to visit Mr. Toad for yourself at Walt Disney World Resort, contact the travel professionals at Academy Travel. The award-winning Earmarked Diamond staff will give you the roadmap so you don’t end up like poor Toad! It’s only the destinations you really want! You can contact their concierge by calling Academy Travel at 609-978-0740 or by clicking on Disney World on this page. No matter where you stay, Academy Travel can make sure you have the wildest (yet safe) ride!

Leave us a comment with your Mr. Toad memories!