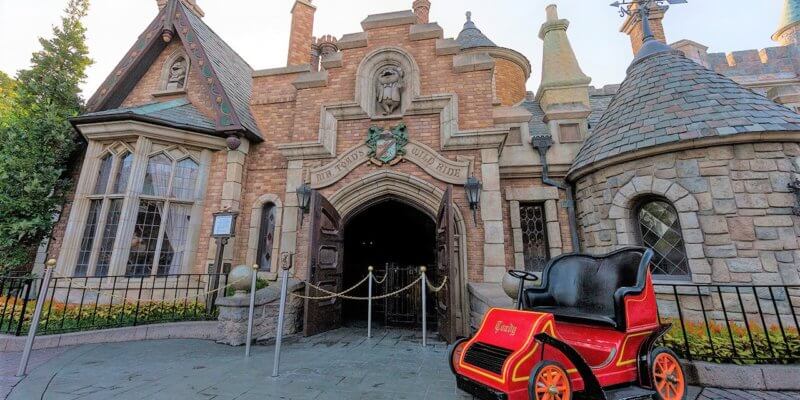 Disney and the Imagineers are always inventing new projects to give Guests the most magical experiences at Disney Parks around the world! With the iconic Splash Mountain — at both Walt Disney World and Disneyland — getting rethemed from Song of the South to The Princess and the Frog, fans are curious about what rides and attractions could be rethemed next.

Peter Pan’s Flight has been oft-discussed, but we also wonder if Mr. Toad’s Wild Ride at Disneyland could be due for some changes. Let’s dive in.

This theme park attraction was inspired by the animated film The Adventures of Ichabod and Mr. Toad, which Disney released in 1949. If you know Disneyland well, then you know this dark ride is one of the few Fantasyland attractions that opened with Walt Disney’s first theme park in 1955.

Per the Orlando Vacation entry about Mr. Toad’s Wild Ride at Walt Disney World, this historic ride was rethemed to The Many Adventures of Winnie the Pooh attraction due to Disney fans’ love of the Hundred Acre Wood characters.

Pooh’s ride was, particularly at the time, contemporary and advanced with new technology, compared to Mr. Toad’s painted plywood flats that Guests would see while riding.

There is also, of course, the fact that Winnie the Pooh may have been far more family-friendly for Fantasyland compared to riding in an old car through “Hell”.

When I think of Walt Disney, there is always a quote that comes to mind when pondering about the future of Disney attractions. Mr. Disney once said:

If Walt Disney believed that creating “new things” would improve his dream, this makes me wonder about the future of Fantasyland for children who are currently visiting the parks. Is Mr. Toad’s Wild Ride completely outdated for today’s generation? What could this dark ride attraction become?

Disney has so many classic films that would be a perfect fit for the theme of Fantasyland, such as Bambi, Lady and the Tramp, and Sleeping Beauty. These classic films could boast a friendlier and less frightening ride for children compared to Toad’s confrontation with the court and the terrible car and train crash.

Disney has announced that they have revamped Disneyland’s Snow White’s Scary Adventures with Snow White’s Enchanted Wish, giving Snow White her happy ending and giving children a less traumatizing experience. Having another famous Princess, like Sleeping Beauty, whose film fits the Fairyland theme and Disneyland’s Castle, could be a wonderful addition to the park!

However, it’s possible that Disney wouldn’t want two Princess-themed attractions in such close proximity to one another.

Christopher Leazer expressed his feelings on Mr. Toad’s and didn’t hold back:

Toad was a travesty right up there with Snow White’s Scary Adventures. However, it’s hard to top the Imaginaton travesty of all travesties.

Toad was a travesty right up there with Snow White’s Scary Adventures. However, it’s hard to top the Imagination travesty of all travesties.

They should replace Mr. Toads Wild Ride with either a Alladin [sic: Aladdin], Moana, or a Beauty and the Beast ride at Disneyland :):):):)

Not to mention, with the technology we have in this day and age, a reimagined Mr. Toad’s Wild Ride could become a draw for Guests.

Frozen Ever After at Disney World’s EPCOT, for example, uses state-of-the-art animatronics to bring Anna, Elsa, Olaf, and friends to life where the dated Maelstrom ride once resided.

Keep in mind that these are my personal thoughts in the hope for a new ride and that Disneyland has not announced any plans to retheme Mr. Toad’s Wild Ride.

You can always research the latest Disneyland Resort updates on the official website.

Would you want Mr. Toad’s Wild Ride to say goodbye? Let us know in the comments below!

Do you need advice planning your next Disney vacation? Our friends at Academy Travel can help!