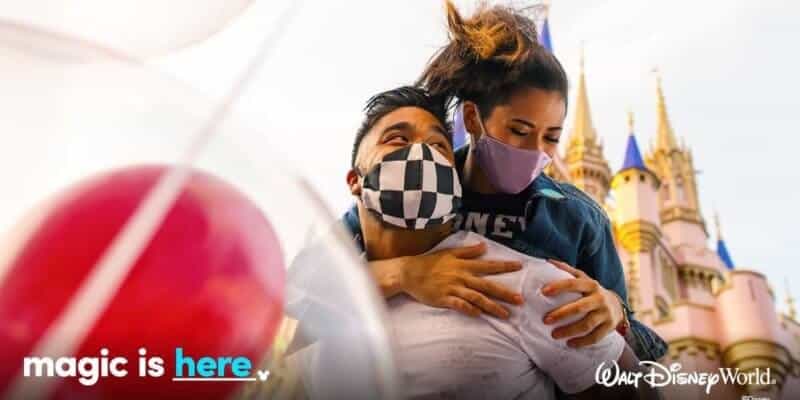 Disney World reopened in July 2020 after being closed since March 2020 due to the COVID-19 pandemic. Disneyland was not as quick to follow, only opening up a couple of weeks ago on April 30, 2021. Things seemed to move so slowly for Guests waiting for the theme parks to open, but now that they have, things seem to have quickly sped up when it comes to safety protocols.

Let’s take a look at the ways both Walt Disney World Resort  and Disneyland Resort are taking steps to get the parks back to the “normal” that Guests used to know.

Disney World has recently announced that they will be ending mandatory temperature screenings for both their Cast Members and theme park Guests. Disney World’s website states:

As this guidance continues to evolve, and with the support of local health and government officials, we are making some additional adjustments. Following the advice of the CDC and our local health officials, we will phase out onsite temperature screenings at Walt Disney World Resort for Cast Members beginning May 8 and Guests on May 16.

As of this article’s publication, Disneyland is still requiring all Guests and Cast Members to continue to receive temperature checks before entering the Disneyland Resort. There is no official word from Disneyland officials as to when this policy will end.

When Disney World reopened in July, many of its popular restaurants remained closed — including all the buffets, which are still closed. But things are changing and Disney World is slowly bringing back more modified character dining. Most recently, Disney announced that family-style character dining would be returning to Chef Mickey’s at Disney’s Contemporary Resort. Other (socially distanced) character dining options that have been open for the past several months are Topolino’s Terrace at Disney’s Riviera Resort and Garden Grill at EPCOT.

Another new change to Disney World’s current health and safety guidelines is the ability of Guests to remove masks for photos taken in the theme park. When Disney World first opened back up, Guests were required to keep their face masks on at all times, except while eating and drinking in designated areas.

However, Guests are now allowed to remove their masks for photos. Disney’s website currently states the following mask policy:

Please bring your own face coverings and wear them at all times, except when dining or swimming. You may temporarily remove your face covering while actively eating, drinking or taking an outdoor photo, but you must be stationary and maintain appropriate physical distancing during this time.

Disney’s Paradise Pier Hotel is a celebration of California’s beachfront heritage, inviting guests to ride a wave of relaxation from the charming seaside-themed rooms all the way up to the exciting, rooftop pool and waterslides for fun in the California sun. This property is located right in the middle of the magic at the Disneyland Resort, just steps from Disneyland park and Disney California Adventure park. Guests can book room reservations starting May 6, 2021, and make Disney’s Paradise Pier Hotel their perfect summer destination!

Guests looking to stay at Paradise Pier when it reopens should note that there will be no dining options available to them within the hotel.

The only dining options that are currently open at Disney’s Grand Californian Hotel & Spa are the Hearthstone Lounge and GCH Craftsman Bar & Grill, but these are available to hotel Guests only. Beginning on May 28, that will change and more will open at the deluxe hotel.

On May 28, there will be several major changes that will take place at the Grand Californian, beginning with the reopening of both Napa Rose and Storytellers Café. Storytellers is traditionally a character dining location at the Disneyland Resort, but it will not be open at this time. Along with the opening of these two restaurants will be the availability of the hotel dining to non-hotel Guests.

Things seem to be moving very fast when it comes to changing health and safety protocols at both Disney World and Disneyland. Inside the Magic will make sure to keep you up to date on the latest changes as they happen at the theme parks!

Do you feel safe with the changing of these protocols at Disney World and Disneyland? Let us know in the comments!