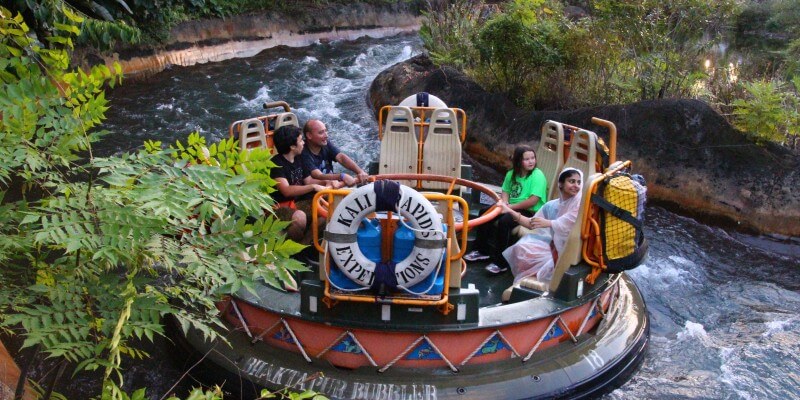 At Disney’s Animal Kingdom Park at Walt Disney World Resort, Kali River Rapids takes Guests on a rip-roaring river adventure past an erupting geyser and gushing waterfalls — but I personally feel that there really isn’t much of a story to go along with the attraction.

That is why I think it’s time for Disney World to reimagine Kali River Rapids.

Operating hours for Kali River Rapids may vary in cases of inclement weather.

The storytelling of Disney attractions

Disney theme park attractions are known for their immersive storytelling aspect as each individual ride brings Guests on an entirely new adventure. Over at Peter Pan’s Flight in Magic Kingdom, Guests are brought into the story of Peter Pan as they visit the Darling children’s nursery and fly to Neverland. And when Guests take on Expedition Everest, they feel transported to Asia as they explore a forbidden mountain and encounter a yeti.

But, when Guests climb aboard the raft at Kali River Rapids, I personally feel as though the storytelling just isn’t executed as well as it could be. That is why I think it is time for Disney to reimagine Kali River Rapids and bring a brand-new story to Guests through the attraction.

There are a few different ideas I have that Disney could take advantage of in order to bring some Disney magic to Kali River Rapids without having to change too much of the attraction.

Moana tells the story of an adventurous teenager — Moana — who sails out on a mission to save her people. During her journey, she meets the once-mighty demigod Maui, who ends up joining her on her quest to become a master wayfinder. Together the duo sets sail across the open ocean and on an action-packed voyage.

Another option is to theme a new ride based on Disney’s latest animated film, Raya and the Last Dragon, which is a fantasy adventure set in a land inspired by the cultures and environments of Southeast Asia. It follows the very first Southeast Asian Disney Princess, warrior Raya, and her sidekick, Tuk Tuk, as they must track down the last dragon, Sisu, to help stop the evil Druun.

Since the cultures and environments of Asia already have a presence in the theme park, a new water-based attraction highlighting Raya and the Last Dragon would be a natural fit. And with Kali River Rapids already being in the Asia section of Disney’s Animal Kingdom, it would make sense!

I would love to see one of these two Disney animated films take over Kali River Rapids, would you?

If you want to visit Disney’s Animal Kingdom on your next Disney vacation, be sure to get in touch with our friends at Academy Travel, who will be with you every step of the way when planning your magical getaway. Get your free quote today.

Do you think Kali River Rapids needs retheming? Let us know in the comments below.