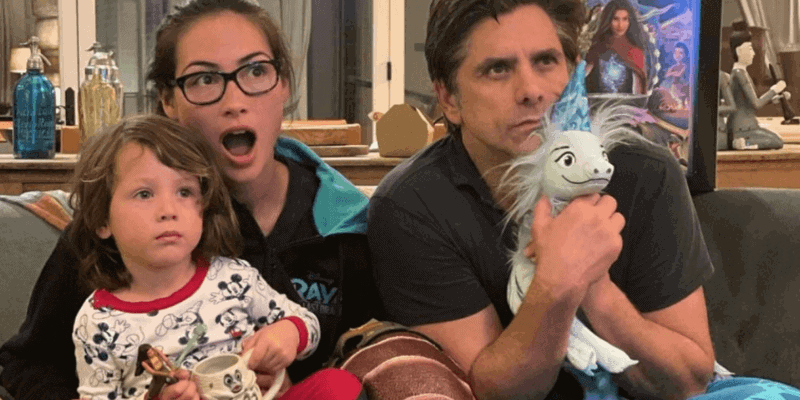 Actor John Stamos may be best known for his long tenure as Jesse Katsopolis (AKA Uncle Jesse) on the Full House sitcom, but, these days, he is almost as well-known for being a Disney superfan.

Stamos and his wife, Caitlin McHugh-Stamos, are massive Disney Parks fans. They even have a memorabilia collection that includes an “it’s a small world” doll, a phone that belonged to Walt Disney, and even a ride vehicle from Dumbo The Flying Elephant!

Furthermore, Caitlin is famous in the DisneyBound community and has a popular Instagram account (@caitlinskybound) where she details all of her Disney Parks outfits and adventures, including her version of Raya from Raya and the Last Dragon!

As it turns out, despite his celebrity status, Stamos has had a few less-than-magic Disney moments. In a since-deleted 2010 Tweet, Stamos shared his experience during an evacuation at Disneyland Resort’s Disney’s Grand Californian Hotel & Spa. He wrote, “fire evacuation from my fav hotel Grand Californian @ Disney – saw nakedness I shouldn’t have seen.”

Per an OC Register report regarding the incident, Stamos’s report of naked Guests was not confirmed, but the fire certainly was:

“Everyone who was observed was clothed,” said Suzi Brown, a Disneyland Resort spokeswoman.

No one was injured in the incident at about 8:39 a.m. Wednesday, said Maria Sabol, an Anaheim Fire Department spokesman.

A fire broke out in a pizza oven in the hotel’s Storytellers Cafe, where French toast was being prepared, Sabol said. The heat prompted a sprinkler to go off, spraying water into the oven and creating smoke and steam, Brown said.

All in all, about 1,000 Guests and Cast Members were evacuated during this particular Disney Parks hotel emergency.

The 2010 Grand Californian evacuation was certainly not the first Disney Resort hotel evacuation. In fact, at Walt Disney World Resort in Florida, both Disney’s Contemporary Resort and Disney’s Riviera Resort have been evacuated over the course of the past year.

Disney takes Guest and Cast Member safety seriously and these evacuations are generally precautionary — in most cases, Guests are able to return to their hotel rooms without incident.

As for Stamos and his family, they are looking forward to returning to Disneyland Resort soon to make more magical memories. Following an extended closure, both Disneyland Park and Disney California Adventure Park will reopen to California residents on April 30, 2021.

Have you ever been evacuated from a Disney Resort hotel like John Stamos?