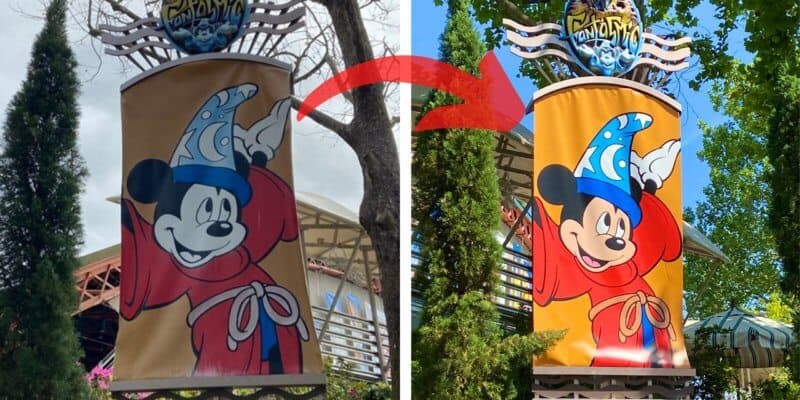 Since the beginning of the pandemic, as soon as the Walt Disney World Resort reopened, many offerings were missing due to COVID-19 and the need to adapt to the current and ongoing pandemic. One of the things that we lost then, and have yet to regain, was nighttime shows.

Nighttime shows tend to draw quite a crowd and can make it tough to social distance, which is why we have not seen shows like Magic Kingdom’s Happily Ever After return to Cinderella Castle. At EPCOT, although we do not yet have an opening date, we do know that Disney’s biggest nighttime spectacular yet will be debuting at some point this year. One show, however, has been in the rumor mill in terms of returning, and that is Fantasmic!

Fantasmic! takes place both at Disney’s Hollywood Studios in the Hollywood Hills Amphitheater on Sunset Boulevard, as well as deep within Mickey Mouse’s dreams. At the moment, from the most recent updates we have seen, the lagoon surrounding the show’s stage remains drained, however, there have been permits filed which could have Guests thinking that work is being done to bring the show back!

The fan-favorite Fantasmic! began playing the show’s pre-show music much earlier in the pandemic so that Guests walking by could be reminded of the magic that happens deep within the amphitheater, but since then, we have not had any other signs that the show would be returning soon, aside from the permits mentioned.

However, it seems that now, Disney has provided us a few literal signs that Fantasmic! has not yet been forgotten, and keeping its exterior fresh is still of importance. Around the theater entrance, Guests can often take a look at the signs which showcase a few of the many characters that the show features such as Sorcerer Mickey, Jafar, Pocahontas, and Beast. With the Florida sun, over time, those signs can become quite faded.

The signage has been given a fresh revamp, and the colors are nice and bold, ready to capture Guest attention. Thanks to Disney Do It All! (@HippyDisneyGuy) we can see what the signs looked like before the new ones were implemented, and when looking at the two side by side, it is easy to see why the changes were necessary.

The signs by Fantasmic have received a beautiful makeover!

The signs by Fantasmic have received a beautiful makeover! ✨#WaltDisneyWorld ? pic.twitter.com/VwROB1trkd

Although we currently do not know when Fantasmic! will return, considering it is an outdoor show with seating, it would be possible for Disney to place social distancing markers throughout to ensure that all Guests are property spaced, if they did want to bring the show back safely.

Until we know more, we will just have to be like Mickey, and dream about the show!

When do you think Disney will bring back Fantasmic! to Disney’s Hollywood Studios?

Comments Off on Fantasmic! Receives Update, Will the Show Return?