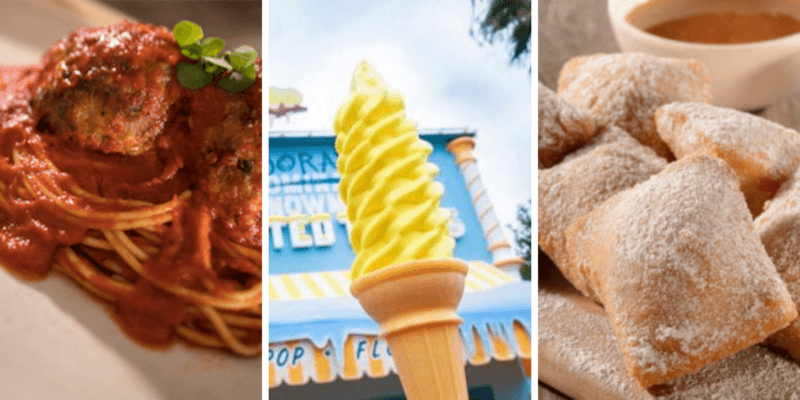 All Images Credit to Disney

From the Grey Stuff to Spaghetti, Disney fans love to eat their way through the Disney Parks. But did you know some of your favorite movie foods can be snacked on? It’s not just Dole Whips and Churros that the Disney culinary team has been cooking up. Step into the Disney Movie Night frames of The Princess and the Frog for Tiana’s cooking, or visit with Remy and his signature dish. No matter if it’s savory or sweet, these Disney Movie foods will leave you satisfied!

Disney Movie Foods You Can Eat in the Parks

Belly up, Disney fans! Some of your favorite dishes featured in Disney movies can also be eaten in the Parks! Whether you are at Walt Disney World Resort, Disneyland Paris, or Disneyland Resort, these meals and treats are waiting on you to enjoy them! Here are our favorites…

It’s delicious! Don’t believe me? Ask the dishes! When you’re visiting Beast Castle in Fantasyland, stop in for a cup of the Grey Stuff. Oftentimes presented in a Chip cup or swirled with edible pearls, the Grey Stuff is reminiscent of Oreos and cream. Find it atop a brownie, too… just don’t look for it at breakfast. It’s more of an afternoon sweet treat via Beauty and the Beast!

Baby Yoda called looking for his snacks! Stop by the Confectionary at Magic Kingdom or the Candy Cauldron at Disney Springs for a single blue macaron seen in Disney Plus’s The Mandalorian. It will set you back $4.99 for a single sweet, so if sticker shock has you feeling tentative, try whipping up your own blue macarons at home with this recipe!

Me-wow! One of our favorite breakfasts at Magic Kingdom, you can grab this East Coast specialty from the Cheshire Cat Café where Fantasyland touches Tomorrowland. As Chessy disappears from Alice in Wonderland‘s view, it’s often his tail that catches our eye. What if you could eat it?

Magic Kingdom’s version is a pastry baked and twisted with chocolate, topped with pink and purple drizzles along the length of the tail. Pair it with a coffee for a picture purrrrrfect morning in the Parks.

Don’t eat the yellow snow! Unless it’s from Pixar Pier’s Adorable Snowman Frosted Treat stand.  Here, you can sample the soft-serve featured in Monsters, Inc. when Sully and Mike get sent to the frozen ends of the earth. It’s lemon flavored and quite delicious on a hot California afternoon. The line can get long for this must-have treat, so be patient. It’s worth it!

This big-as-your-face cookie is what Jack-Jack from The Incredibles loves most! Featured in The Incredibles II, Jack-Jack’s cookie is served warm in a low and wide cupcake wrapper to keep your hands clean. But you will surely need a few napkins! Find this treat in Disney California Adventure’s Pixar Pier as well as Disney’s Hollywood Studios in Florida.

Blue milk or green milk? Which is the best! Find these outer space nearly frozen treats at the Black Spire Outpost in Star Wars: Galaxy’s Edge at Disney’s Hollywood Studios and Disneyland Park. Taste both Blue Bantha milk (laced with lavender) and Green Milk from Thala-sirens (with chamomile) and decide which one you like the best. For those of age, these dairy-free milks can be served with alcohol. 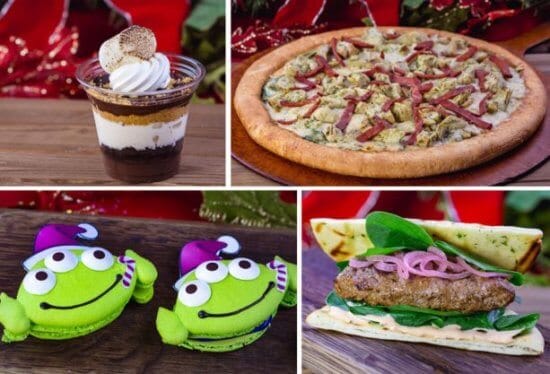 If you find yourself in Tomorrowland at Disneyland Park, visit the little green men at Alien Pizza Planet. The Italian restaurant serves up classic Disney pizza slices in the style of the Toy Story food chain, Pizza Planet, minus the claw games. Though, now that we think about it, let’s throw a Pizza Planet into Toy Story Land and have some real fun!

Coming in many forms, the poison apple from Snow White and the Seven Dwarfs is delicious. Sometimes it makes its way into the Main Street Confectionary as a candy apple, a cake pop, or a cookie. Disney Spring’s Candy Cauldron even features an Old Hag Witch in the window, so choose your treats with care!

Lottie was right – Tiana can really cook! Visit Port Orleans French Quarter Resort for a plate full of these New Orleans delights, or stop into Disneyland Park on the West Coast to pair the powdered sugar topped Tiana’s beignets with a mint julep for a truly Disneyland experience. Our favorite Disney Princess is such an amazing chef; these Princess and the Frog treats are a taste to behold!

You can also find Tiana’s Gumbo at the Disneyland Park location, so I hope you’re hungry for a movie-inspired Disney dinner!

Lady & The Tramp’s Spaghetti and Meatballs

Tony’s Town Square Restaurant is at the head of Magic Kingdom and is a must-eat for this reporter. Ever since the menu was refurbished, the hand-made pasta and spaghetti and meatballs inspired by Lady and the Tramp have made our hearts sing. Picky eaters will be happy at this family restaurant with plenty of delicious food choices. Check the outside of the eatery to find Lady and the Tramp’s paw prints from their “Buena Notte” dinner date!

Rat-patootie? Sign us up! Remy’s Ratatouille veggie-inspired dish can be found at Disney California Adventure’s Lamplight Lounge, and at Disneyland Paris’ Bistrot Chez Rémy. Carve out your own bowl of “anyone can cook” and live like you’re in Ratatouille!

What other Disney movie foods would you add to the Parks? Perhaps Kronk’s Spinach Puffs? Snow White’s Gooseberry Pie? Mulan and Mushu’s breakfast porridge? There are so many opportunities to bring our Disney films to our plates!

Have you tried these Disney Movie foods in the Parks? Leave us a comment below about your favorite treat!