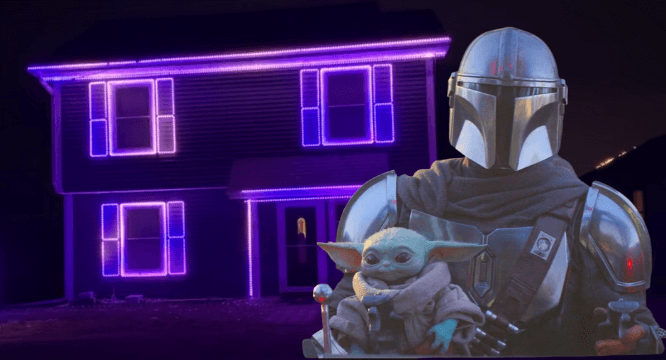 For the last six years (since 2014), Steve Beers has been setting up his house for music and lights show each holiday season. Debuting classics like The Garfield Christmas theme, Little Drummer Boy, Baby, It’s Cold Outside and Into the Unknown by Panic at the Disco, lights are cast onto Beers’ house with precision, color, and effortless execution. One of this year’s offerings is The Mandalorian light show, utilizing the popular Disney+ theme song and Beers’s light setup.

While this space spaghetti western really doesn’t have anything to do with Christmas, Beers realized that “2020 sucked. I really liked this theme song and wanted to do something that brought a smile to people’s faces. This was the canvas I had, so I decided to visualize the theme song.” Watch the video below for the full show:

Steve Beers’s show is actually silent (if you stand at his curb) with the music only becoming available when you tune into a local FM radio station as the show blinks away from 5 PM to 10 PM on the days it is operational. It’s similar technology to drive-thru light shows around the country. (No neighbors get blasted out each night to endless reoccurring music loops.)

And no, his neighbors reportedly don’t hate him. He kindly checked with each nearby resident before the show started running and many of them say how much they love it! No one lives directly across the street, so no one is getting blasted with light streams for five hours straight.

I would think the electricity bill for this annual holiday display would be wild, but thanks to smart plugs and low voltage LED lighting, Beers reports that the bill for the show is only a few dollars! The traditional bulb -it “Christmas tree inside the house pulls more electricity than this show does.”

If you want to know Steve Beers’s secrets for the light show, they are pretty simple. He uses bullet pixel RGB LEDs which are controlled by an F16V3 lighting controller while the sequence is scheduled from and runs off of a Raspberry Pi. According to his YouTube channel FAQ, the sequence is created in a program called xLights.

If you want more insight into The Mandalorian‘s theme song, Oscar-winning musician and composer Ludwig Göransson performs the theme from The Mandalorian in this music video. Unusual instruments are used to create the musical sounds, and as a musical theatre geek and budding star wars fan, I really enjoyed the deep dive into this composition. Video from the official Star Wars Youtube channel.

What do you think of The Mandalorian light show? We’d love to try and create this ourselves! Leave us a comment with your thoughts!