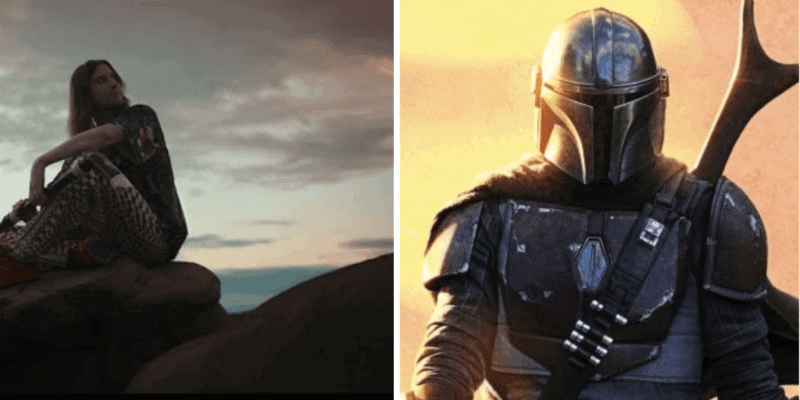 With the major success The Mandalorian has had, both as a series on the Disney+ streaming platform and in popular culture (we see you, Baby Yoda), it’s no surprise that the Star Wars show continues to be marketed in new ways.

The Star Wars music video, officially titled “Scoring The Mandalorian,” begins with Göransson in the studio while The Mandalorian plays on a screen behind him. As it progresses, Star Wars fans see Göransson in various locations, including a starship, an ethereal desert landscape, and the roof of an abandoned building.

Throughout the music video, Göransson, a talented musician, plays several instruments including drums and piano.

Prior to Season 1 of The Mandalorian, Göransson had previous experience with The Walt Disney Company, working on the score for Marvel’s Black Panther film. He is also known for his work on the Rocky franchise, scoring both Creed and Creed II.

Music video director Ravishankara has previously worked with bands like The Lumineers and Hozier.

Season 2 of The Mandalorian

The second season of The Mandalorian on Disney+ is fast approaching. Filming for the sophomore season of the Star Wars series wrapped just before the global production shutdown in March. Jon Favreau has confirmed that Season 2 will air in October, as originally scheduled.

There is a great deal for fans of the hit series to be excited about this fall. With the addition of numerous characters from Star Wars: The Clone Wars and an appearance by Boba Fett (Temuera Morrison), Din Djarin (Pedro Pascal) and The Child are sure to encounter their fair share of adventures moving forward.

Season 3 of The Mandalorian is already in development, so any questions that aren’t answered this year may very well be on tap for 2021.

What do you think about the new Mandalorian music video by composer Ludwig Goransson? It’s dark, moody aesthetic perfectly suits the show in this writer’s opinion!

Comments Off on New ‘The Mandalorian’ Theme Song Music Video