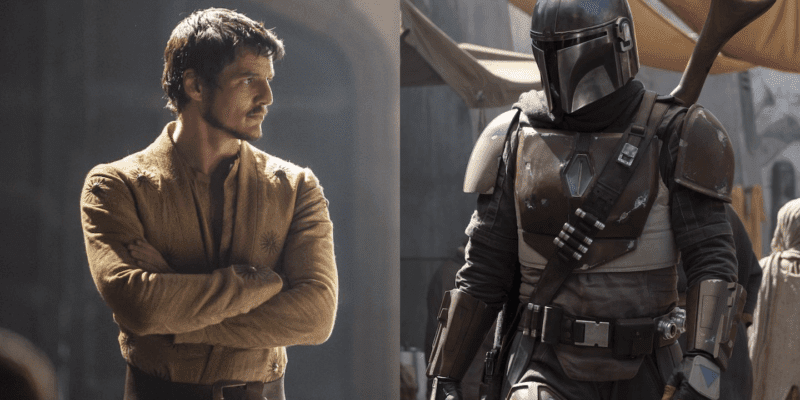 Surprise: It’s not Pedro Pascal underneath that baskar’gam (Mandalorian armor). At least, not for all of the episode “Chapter 4: Sanctuary.” While we do hear his voiceovers, it was released that it is not always Pascal onscreen as The Mandalorian.

In an interview, it was explained that Pascal has two other men who help him bring “Mando” to life: doubles named Brendan Wayne and Lateef Crowder. It has become a collaborative effort bringing The Mandalorian to life, especially when Pascal had to miss the entire filming of the episode “Sanctuary” due to a scheduling conflict. While Pascal was starring in King Lear, Wayne dawned the mask to play the next round of “space cowboys.”

But double Brendan Wayne just so happens to be the grandson of legendary actor John Wayne. A professional actor in his own right, Wayne worked closest with episode director Bryce Dallas Howard.

“He absolutely just brought everything to that character,” she said. “We were able to find the moments and figure them out together.”

Wayne also did a great amount of prep work with Pascal, who would still voice the character. He said:

“[Pascal] would ask me, and I would ask him the same question, which is, ‘Why did you move like this during that moment?’ We would go back and forth. The great thing about him is he’s not impressed with himself. He’s just an actor. And I mean that in the good way, not the bad way. He likes to learn and he likes to collaborate and he’s very good at it.”

But it is only fitting that the grandson took on the Wookie’s share of the camera time for “Sanctuary.” Not personally known for working in westerns, we are sure he channeled his grandfather to master this classic western story where he comes to save the day.

A Tribute to Classic Star Wars

In a way, having stand-ins in The Mandalorian is a tribute to the original Star Wars trilogy. We never see “Mando’s” face just as we never saw Darth Vader‘s face. While James Earl Jones played gave fans Vader’s unforgettable voice, Dave Prowse stood in as the over-6-foot-tall Sith Lord.

Related: “The Mandalorian” has a special tie-in with “The Rise of Skywalker”

Once again, we see a figure in a mask with nothing but a voice and a dominating presence. Having someone else stand-in seems only fitting; a subtle yet powerful throwback to what started it all.

What do you think about the stand-ins for The Mandalorian? Did you figure this would happen? Let us know in the comments!