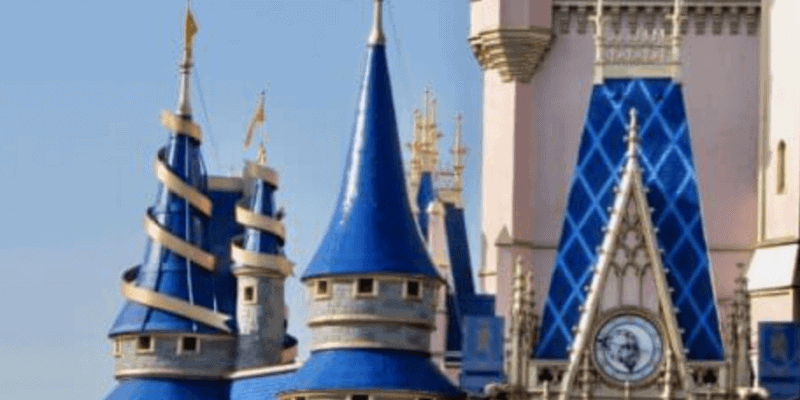 In 2020, the new paint job for Disney World’s Cinderella Castle began to grace our favorite turrets and brick walls. With the color-shifting blue and pink glinting in the sun, slowly the new vision for the castle began to take shape.

Although this royal makeover was officially to celebrate 70 years of Walt Disney’s Cinderella (1950), it also gave Cinderella Castle a stunning new look ahead of the 50th Anniversary of Magic Kingdom Park.

After the blue turrets and central pink walls were painted, the exterior bricks became dotted with a “paint by number” scheme that added dimension and grandeur.

The “rose gold shimmering castle” design was looked at in Architect and Imagineer Zach Ridley‘s Instagram post this past March. You can see the golden ribbons that will lace over the castle turrets being designed backstage on forms, as well as an extreme closeup of the paint job of the bunting. Ridley’s caption reads:

Our @WaltDisneyImagineering teams have been hard at work on the new décor package for Cinderella Castle at Magic Kingdom and today I’m excited to share a first look at our progress. As you can see in the video, Cinderella Castle will receive the royal treatment when shimmering jewels and ribbons in royal blues and EARidescent golds will wrap its turrets and towers in all directions for the 50th anniversary of @waltdisneyworld later this year.

To celebrate this enduring icon of Magic Kingdom, our Imagineers developed these new colors, gold detailing and vibrant hues after drawing inspiration from Mary Blair’s vision in the classic Cinderella film. We look forward to sharing more about our design inspiration and approach as we bring this vision to life and cannot wait to see these details begin to adorn the castle in the weeks and months to come!

In-person, the gold ribbons on the blue turrets are a lovely contrast, lacing elegantly from top to bottom. A keen eye can see the support wires keeping everything in place.

The bunting also features medallion-style buttons, appearing to hold the bunting to the castle. The Imagineers did an excellent job with the hard-formed swags because they appear to drape so naturally. In reality, everything on the castle is hurricane-proof, including the ribbons, bunting, and medallions.

From a distance in the hub, the castle’s look is really quite elegant. Despite fan’s mixed reactions to the new paint job, the 50th anniversary additions are nothing but supplemental to the complete look.

Ah, the crane. Disney Guests who frequent Magic Kingdom know the crane well.  Often used to decorate the castle with shimmering lights for the holiday season or to repair and maintain the castle, the crane has been frequently present in past years.

The reappearance of the crane to work on the turrets and golden ribbons is both a familiar yet irritating sight for some Guests, as the crane will inevitably appear in all your castle photos while it’s on-site. The crane will be adding ribbon turret toppers as the Cinderella Castle design for the 50th anniversary is completed. This week, when not being used, it was parked in Fantasyland beside Sir Mickey’s gift shop.

To the left of the castle, another green crane sits in the moat, completing tasks as needed.

When you’re ready to photograph Cinderella Castle for yourself (or perhaps pose for PhotoPass Photographers), contact the travel professionals at Academy Travel. The award-winning Earmarked Diamond staff will point out their favorite decorations for the anniversary and guarantee a vacation that will enchant your family. You can contact their concierge by calling Academy Travel at 609-978-0740 or by choosing your preferred destination on this page. No matter where you stay, Academy Travel can make sure you can stay past midnight!

Leave us a comment with your thoughts on the continuing work on Cinderella Castle!