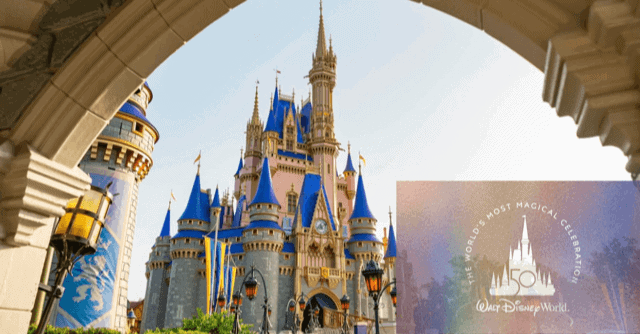 The Walt Disney World Resort is months away from the Magic Kingdom’s 50th anniversary celebration, and preparations are in full swing! One way the resort is hyping things up is by decorating Magic Kingdom’s Cinderella Castle.

We have an inkling on just how the resort plans to decorate the park staple before the big 50th anniversary and we can’t wait for the final reveal before the celebration begins.

As we have reported before, the celebration will begin on October 1, 2021 and will run for a full 18 months. The resort has even deemed the event The Most Magical Celebration on Earth! As for the Cinderella Castle, the Disney described the decorations, along with concept art, to come as follows:

Thanks to @bioreconstruct on Twitter, we now have another update to the ongoing preparations on the Cinderella Castle.

We can see the decorations continue to be added to the side of the castle. As the weeks go by, Disney has been adding more and more shimmering decor.

Tall photo. Cinderella Castle as of March 27. Decoration in progress for the 50th anniversary of Walt Disney World. pic.twitter.com/plQf8jDIsJ

In the photos below, you can see that in addition to the bunting, the painting of the roof is ongoing.

At center is one of the last roofs of Cinderella Castle to be painted with blue seen on its side, and also on the turrets. pic.twitter.com/BIu9ce8erX

Here’s another close up image of the Cinderella Castle update. The roof will soon be completely painted to match the new “EARidescent” blue of the rest of the castle rooftops.

One of the last roofs of Cinderella Castle to be painted the new blue. pic.twitter.com/ym0WH3VS8h

As for the rest of the décor for Magic Kingdom‘s Cinderella Castle, there’s still plenty to come as Disney gradually updates it, adding even more decorations over time. Keep in mind that Guests visiting the park still have a few months until the final reveal. However, this slow and gradual reveal of the castle’s 50th look has left Walt Disney World fans a little split. Some prefer more of a surprise reveal, while others enjoy watching the transformation over time.

One thing is for sure — this celebration is about to be one of epic proportions and we cannot wait for what’s in store!

Are you and your family thinking about visiting the Magic Kingdom during its 50th anniversary this year or in 2022? Start planning your magical vacation now with Academy Travel!

Comments Off on Cinderella Castle Gets Enchanting Updates Before 50th Anniversary!