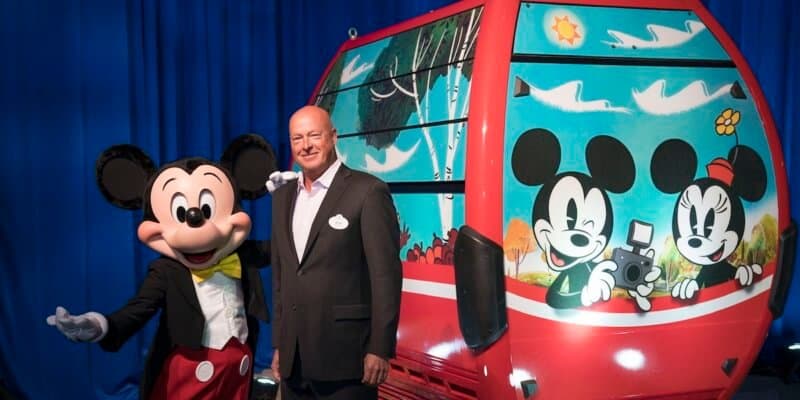 Last February, Disney CEO Bob Iger announced that he would be stepping down from his role as CEO of The Walt Disney Company. His successor would be former Chairman of Parks, Experiences, and Products, Bob Chapek.

It was a rocky start in the position for Chapek, who almost immediately had to deal with the unprecedented decision to close the theme parks due to the pandemic.

Now, things are looking up. The Disney parks are slowly reopening around the world. In the U.S., Walt Disney World Resort in Florida reopened last summer, and, after more than a year, the original Happiest Place on Earth, Disneyland Resort, will be reopening on April 30.

Throughout the past year, The Walt Disney Company has navigated massive layoffs, furloughs, and figuring out when it would be safest to open the Disney parks that Guests have been yearning for. For CEO Bob Chapek, it has been a hard year to lead one of the largest companies on the planet.

Chapek recently sat down with award-winning keynote speaker Don Yaeger to discuss different aspects of his work with The Walt Disney Company, including leadership at Disney and how he drives the company forward in a rapidly changing industry.

When it comes to navigating and responding to change, Chapek said:

“In order to succeed in a very rapidly changing world, you have to be a disruptor. You can’t wait for something to happen to you and be the victim of change. You’re best prepared for it if you are on the front end of that wave, and you are creating the change…Disruption is a core competency, I think, of mine. Not disruption for disruption’s sake, but always thinking ahead.”

The Disney CEO considers Disney a leader in their field because they are always thinking forward — always thinking of what could happen, what could be done, and how Disney can be at the forefront of creativity, technology, and leadership.

“It’s about curiosity..If you have the curiosity to ask the questions, then you become fluent, at least more fluent, in it and you start the cycle, and you catalyze that quest for awareness and knowledge and then you do the next step, which is assimilation, which is where you see what’s possible and then you apply that with vision in terms of where you think you want to go. All of a sudden, curiosity turns into vision. If you don’t know what’s possible, how could you know where you want to go.”

In nearly three decades with The Walt Disney Company, Chapek has overseen numerous projects that have expanded Disney’s influence across the globe. According to Disney:

During his tenure, Disney Parks saw the largest investment and expansion in its sixty-year history, including the successful opening of Shanghai Disney Resort; nearly doubling the Disney Cruise Line fleet; introducing the most technologically advanced and immersive lands in the parks’ history, Star Wars: Galaxy’s Edge at Disneyland Resort and Walt Disney World Resort; the growth of Marvel-inspired attractions across the globe; and one of the most ambitious development projects at Disneyland Paris since the park first opened.

What are your thoughts on Bob Chapek’s views on leadership at The Walt Disney Company? Let us know in the comments below.

CLICK HERE to book your magical Disney vacation with our friends at Academy Travel!

Comments Off on Bob Chapek on Leadership: “It’s About Curiosity”