Did This Disney Park Just Tease ‘Tangled’ Area? See the Post! - Inside the Magic 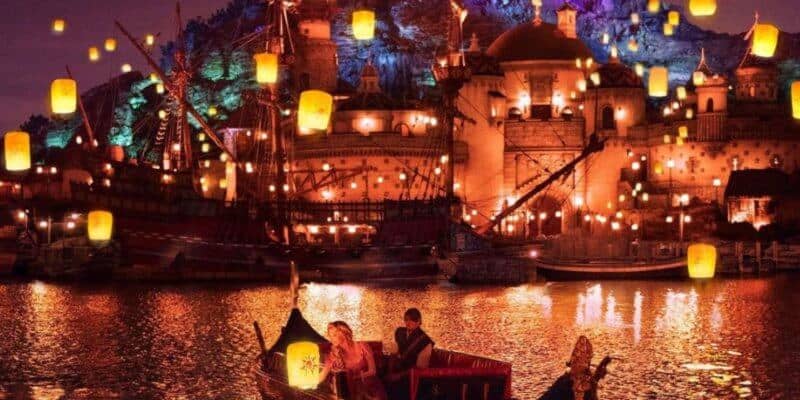 It is no surprise that Disney fans love the animated film Tangled. From the fantastic and extremely catchy music to the love story between Rapunzel (Mandy Moore) and Flynn Rider (Zachary Levi), to the cute sidekicks like Pascal and Maximus (or Max, for short), Disney fans cannot get enough.

Interestingly, for the amount of love the Disney Princess has with fans, Tangled has not been heavily represented in the Disney parks, unless you want to count the bathroom at Magic Kingdom. Now, we recently discovered that Guests will be able to explore even more of Corona, the kingdom where the animated film takes place.

Related: Will Amber Heard Be Cast in Live-Action ‘Tangled’?

Tokyo DisneySea will be receiving a Tangled section within the Fantasy Springs expansion, as confirmed by Disney CEO Bob Chapek. Chapek stated:

“…at Tokyo Disney Resort, the largest expansion ever for Tokyo DisneySea is underway, Fantasy Springs as its called, will feature new areas and attractions inspired by the worlds of Frozen, Tangled, and Peter Pan’s Neverland, and is set to open in 2023.”

Most recently, it seems that the Tokyo Disneyland Instagram (@tokyodisneyresort_official) has taken to their feed to tease Guests about the upcoming IP that will inhabit their park. With a shot of Rapunzel and Flynn releasing the Lost Princess lanterns in the DisneySea lagoon, Guests can begin to imagine what it is going to be like to have more than just a tiny taste of Tangled in a Disney park!

How much Tangled is coming to Fantasy Springs?

Although we do not yet have too much detail on the new Tangled area of the park, Disney has released concept art to let us see what to expect once it is completed. Of course, we are going to get Rapunzel’s tower, and also, what looks to be a version of the Snuggly Duckling tavern where Guests can all have a dream! Considering Shanghai Disneyland already has the  Tangled Tree Tavern, a quick-service establishment, it seems likely that DisneySea will receive the food service location as well.

We also reported that there may be a boat ride that Guests can board to have the “best day ever”, according to Disney Fandom Wiki.

Guests will board gondolas for a romantic boat tour of Rapunzel’s “best day ever” as Rapunzel journeys with Flynn Rider to the lantern festival. Countless flickering lanterns illuminate the attraction’s climactic scene while Rapunzel and Flynn sing the iconic song “I See the Light” [composed by Disney Legend Alan Menken (Aladdin, The Little Mermaid, Beauty and the Beast)], leading to an unforgettable finale.

That being said, we do not have all of the specific details from Disney, although we do hope to relive the film at an attraction in the future! Personally, I would love to see an animatronic Pascal running around everywhere, and even a singing Mother Gothel would be fun!

Now, we just need to hope that more Disney Parks will follow suit and add more Tangled into the lives of Guests around the world through Disney!

Do you want to see more Tangled in the Disney parks?