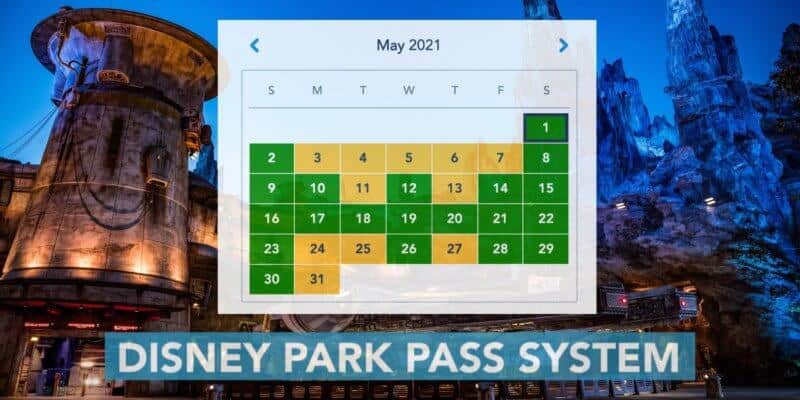 Disney World Park Passes are continuing to book up. If you’re planning to visit Walt Disney World in the near future, then we highly suggest double-checking for Park Pass availability before booking your vacation.

After checking the Park Pass calendar, it seems that even though a lot of people expect summer break to be a busy time at the parks, the availability of reservations (or lack thereof) is indicating that Walt Disney World is set to draw summer crowds earlier this year.

In July 2020, when Disney World reopened to the public after being temporarily closed due to the pandemic, the Orlando resort added a new system called the Disney Park Pass system.

In case you aren’t familiar, this new system allows Guests to book a reservation for one of the four theme parks including Magic Kingdom, EPCOT, Disney’s Animal Kingdom, and Disney’s Hollywood Studios on any given day (as long as they still have availability). Keep in mind if you haven’t already used this new system, you must have a valid ticket and a reservation for the park if you plan on visiting.

Related: Disney World Hints at Nighttime Show For The 50th

The Park Pass system is the new way of monitoring Disney World theme park capacity as it is still reduced to 35%. Additionally, this is something Guests should get used to as it looks like the Park Pass system will be around for the next two years, at least.

You can find out more information on the Park Pass system here on the Walt Disney World website.

Park Pass Availability For May 2021

After reviewing the availability calendar, we have noticed that Park Passes for theme park ticket holders and Resort Guests are booking fairly quickly.

For the month of May, it looks as though most of the weekday dates are filling up (see screenshot below). For all the dates highlighted in yellow, Disney’s Hollywood Studios is the park completely booked. We do want to note that Magic Kingdom, EPCOT, and Disney’s Animal Kingdom are all still available at the time of publication (aside from May 3 where Magic Kingdom is also booked).

There is good news ahead for Annual Passholders! After reviewing the calendar, it looks as though the only date that is not available is for Magic Kingdom on May 1. However, all other Disney World theme parks are available on that date and for the rest of the month, so be sure to check in soon and secure spots for May if you’re an Annual Passholder and are planning a trip.

With all the new and upcoming events happening in Walt Disney World this year, including Remy’s Ratatouille Adventure in the France Pavilion in EPCOT and the spectacular Walt Disney World’s 50th anniversary celebration in the parks (both coming in October), it is clear to see that Disney has not lost its magic even during a pandemic that lasted longer than we initially anticipated.

As always, Inside the Magic will keep you updated on calendar changes happening with the Park Pass System and other exciting Disney World news as we get information.

Are you planning a Disney World visit this May? Let us know in the comments below!