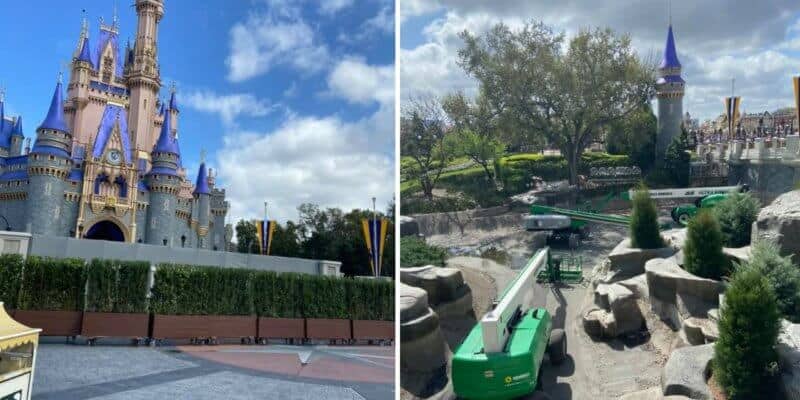 If you have been following the news about Walt Disney World Resorts’ 50th Anniversary celebrations, you likely know that Cinderella Castle is getting a royal makeover! Disney has recently announced that “The World’s Most Magical Celebration,” is being held for 18 months to celebrate 50 years of magic, and although we do not know everything being offered yet, we do know that Cinderella Castle at Magic Kingdom will be glittering gold from Disney’s renderings.

Now that Disney has officially announced the celebration as well as given Guests a start date, preparations are underway to get the parks ready for the 50th anniversary at Disney World, including draining and cleaning Cinderella Castle. As you can see below, the entire moat around the castle at Magic Kingdom has been drained for what seemingly looks like cleaning.

From another view, we can see that there are many cranes in the moat area around the castle. Although cleaning must be done, there is a chance that Disney is also doing some other repairs, maintenance, or updates for the 50th anniversary!

And it is not just the moat that has been drained, but the stage has been stripped bare. At the moment, there are no stage shows such as Mickey’s Royal Friendship Faire happening at Magic Kingdom, but considering Disney is re-doing the stage area, perhaps there is a chance that Disney is looking to bring some sort of stage show back to Magic Kingdom for the 50th anniversary.

Considering Cinderella Castle is one of the best photo spots in Disney World, even when undergoing construction it is important that Disney keeps the castle facade looking as perfect as possible for Guests! Right now, it seems that Disney has set up some scrim blocking the stage with some shrubbery in front. Hopefully, these renovations are completed shortly so Guests visiting Disney World can once again get the perfect castle shot!

Related: Will Disney World Bring Back Annual Passes in 2021?

It is not only Cinderella Castle undergoing a makeover at Disney. EPCOT’s Spaceship Earth, the Tree of Life at Animal Kingdom, and Disney’s Hollywood Studios Tower of Terror will also all be shining shimmering splendidly for the celebration!

Will you be attending Disney’s 50th Anniversary celebration?

If you want to be at Walt Disney World Resort’s 50th Anniversary Celebrations, you need to get booking today to ensure you arrive on time in Orlando! You can visit Magic Kingdom, Animal Kingdom, Disney’s Hollywood Studios, and EPCOT to celebrate with Mickey Mouse and Minnie Mouse. Disney Springs will also have all the dining your heart desires. Disney Park Pass reservations are selling fast, so click here to get started!

Comments Off on Cinderella Castle’s 50th Anniversary Makeover Is Underway!