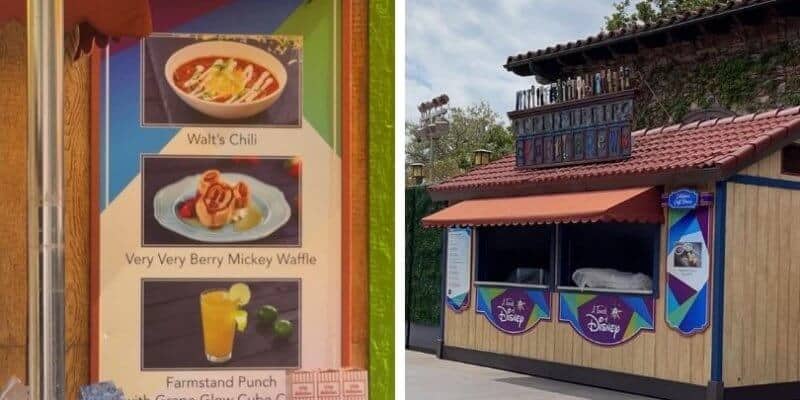 Both theme parks at Disneyland Resort — Disneyland Park and Disney California Adventure Park — have remained closed due to the pandemic ever since March 14, 2020. For nearly a year, Guests have been eager to once again get the Disneyland experience — And pretty soon they can!

The Downtown Disney District, and by extension, Buena Vista Street in Disney California Adventure, opened up to Guests for select outdoor dining and shopping, which fans have been loving, but it’s safe to say, they’ve been wanting a little bit more.

Now, thanks to @thecalibae on Instagram, we have a first look at the food booths coming to this special ticketed event, as well as prices.

Additionally, we have an idea of how much each food item will cost — Which allows Guests to begin planning out how they will use that $25 credit that is included with admission. It looks as though Guests will be able to purchase three or four food and drink items as most are priced between $6-$8, which is a pretty good deal if you ask me! The $25 gift card can also be used at other locations throughout the park, so you do not have to only use it on items from the outdoor kiosks.

But, food is not the only thing Guests will be experiencing at A Touch of Disney. In fact, it wasn’t long ago that Disney Parks Blog shared that Guests attending the special ticketed event at Disney California Adventure may catch a wave from various Disney characters from a safe social distance, including:

It is important to keep in mind that this is a ticketed event coming to Disney California Adventure. Disneyland Park remains fully closed at this time. Additionally, no rides or attractions will be operating during A Touch of Disney to stay in line with the state guidelines.

The good news is that just last week, the theme parks in California received some promising news as all California theme parks, no matter the size, are now allowed to reopen in the red tier (tier 2) at a 15% limited capacity. Additionally, the theme parks can only host California residents only, no out-of-state Guests are allowed. It is worth noting that detailed guidelines and reopening strategies specific to each theme park are forthcoming and will be announced in the coming days and weeks.

Disneyland Resort is located within Orange County and could actually reach the red tier soon, meaning both Disneyland Park and Disney California Adventure could technically reopen in just weeks!

Will you be attending A Touch of Disney? Let us know in the comments below.