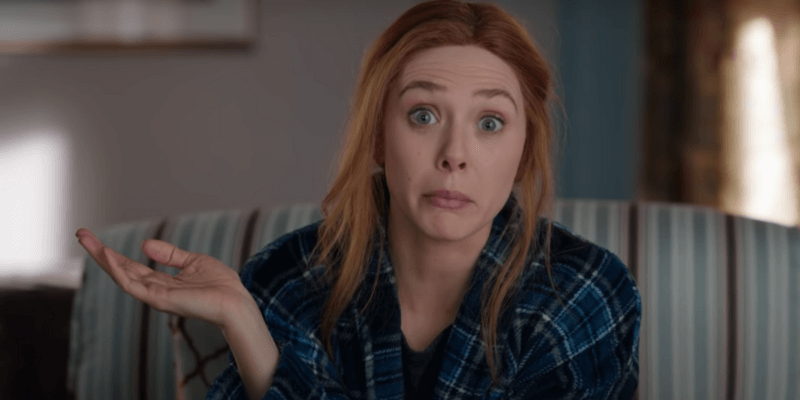 WandaVision‘s latest episode hit Disney+ on Friday, and Marvel fans can’t wait to see what’s next for Wanda Maximoff (Elizabeth Olsen) and Vision (Paul Bettany). After a fast-paced birth of twins and the intrusion of a nosy neighbor, Wanda suddenly brings up her late brother Pietro/Quicksilver (Aaron Taylor-Johnson). Since then, fans have been asking one thing. Is Quicksilver coming back?

Only a few hours ago, lead actress Elizabeth Olsen couldn’t hold in her excitement for a major upcoming cameo in WandaVision — one that she says is on par with Luke Skywalker’s reappearance in The Mandalorian Season 2 finale episode on December 18, 2020.

Elizabeth Olsen is 'really excited' for fans to see a major #WandaVision cameo that's on par with Luke Skywalker in 'The Mandalorian' ?

In a recent interview with TV Line, Olsen gave a simple “Yes” that WandaVision will soon have a similar cameo. She’s reportedly “really excited” for the appearance of a major character.

It’s unconfirmed, but there’s a good chance it could be Quicksilver.

Who else would be making a major cameo in the Disney+ series, other than Robert Downey Jr. or Chris Evans, for example? And, to be frank, it’s not going to be Iron Man or Captain America.

Geraldine, you stepped over the line.

The Vision family’s idealized suburban lives are popped, and Wanda’s natural maternal instincts came out. It’s unclear why Rambeau even brought up Ultron, but it makes sense why she knew. Since she was the only conscious citizen of Westview, Monica knew the Avengers’ details like any Marvel fan.

Since the mention of Quicksilver, fans were quick to connect some dots.

Related: Could X-Men Characters Make Their MCU Debut in ‘WandaVision’?

Evan Peters in the MCU?

Played by actor Evan Peters, also of American Horror Story fame, Quicksilver made major appearances in X-Men: Days of Future Past (2014), X-Men: Apocalypse (2016), and X-Men: Dark Phoenix (2019). Quicksilver made a breakthrough with 20th Century’s X-Men franchise with his witty and charming character.

Since The Walt Disney Company’s acquisition of 20th Century Fox — now 20th Century Studios — in 2019, Marvel fans were eager to see the X-Men, Deadpool, and the Fantastic Four officially crossover into the Marvel Cinematic Universe. At the Disney Investor Day 2020 event, a Fantastic Four reboot was announced with Spider-Man: Homecoming director Jon Watts attached as the project leader. A Deadpool 3 is reportedly in the works as well, but there’s no news for an upcoming X-Men reboot.

Crossing the X-Men into WandaVision is completely plausible, though. The classic sitcom series is confirmed to tie into the upcoming Doctor Strange in the Multiverse of Madness and Spider-Man 3 (untitled) — both of which deal with the Multiverse. It’s reported that Doctor Strange will have a big influence on the tv series, and if it’s anything like in Avengers: Endgame, the sitcom will feature some major Marvel characters.

Since last year, rumors speculate that Evan Peters’s addition to WandaVision would somehow lead to a Quicksilver crossover.

Fast forward, and Evan Peters is officially apart of the WandaVision cast for an unknown role. Like Kathryn Hahn’s character, Evan Peter’s involvement in the Marvel Cinematic Universe remains a complete mystery — at least from an official standpoint.

Crossing the X-Men into WandaVision is completely plausible, though. The classic sitcom series is confirmed to tie into the upcoming Doctor Strange in the Multiverse of Madness and Spider-Man 3 (untitled) — both of which deal with the Multiverse. It’s reported that Doctor Strange will have a big influence on the tv series, and if it’s anything like in Avengers: Endgame, the sitcom will feature some major Marvel characters.

Anyone from Doctor Strange to Nightmare could open the Multiverse and let Peter’s Quicksilver speed into the Marvel Cinematic Universe. So now, it’s a waiting game

Do you think Quicksilver will return in ‘WandaVision’? Let us know in the comments below!