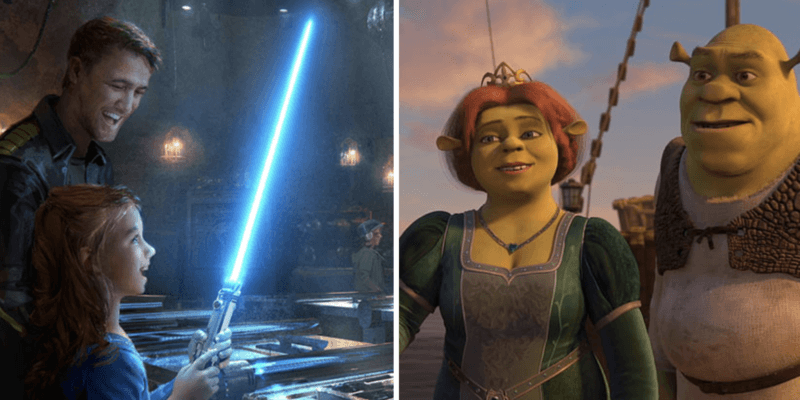 When the residents of Duloc saw the weapon from a galaxy far, far away, Instagram user and YouTuber Jonathan Crichton initially expected the Shrek characters to be confused.

Princess Fiona, however, quipped that the gang knew what a lightsaber was because, “Yeah, we have a TV.” They must be as hooked on The Mandalorian as the rest of us! We’d love to get Shrek’s take on the Darksaber storyline.

Related: The Force Is Strong With This Lightsaber Churro!

As the hilarious video continues, Princess Fiona, Shrek, and Donkey take turns guessing what color Crichton’s Galaxy’s Edge souvenir is. Shrek, at one point, guessed purple, so he’s clearly not as tuned into the Star Wars canon as we might have hoped — there’s only ever been one purple lightsaber and we all know it belongs to Jedi Mace Windu (Samuel L. Jackson).

Eventually, Princess Fiona won when she guessed blue and an “intense celebration” ensued. Just watch. We promise you won’t regret it.

Get Your Own Galaxy’s Edge Lightsaber

If you’re interested in building your own lightsaber at Star Wars: Galaxy’s Edge at Disney’s Hollywood Studios, you’re in luck! Savi’s Workshop on Batuu is currently accepting reservations.

Disney World Guests who visit the Workshop can choose from a wide variety of lightsaber styles.

Meet one of Savi’s Gatherers outside his workshop, where you’ll choose one of 4 available hilt themes and receive a cloisonné pin to identify your selection. Themes include:

The Gatherers will now help you select the heart of your lightsaber—the kyber crystal, which is available in red, blue, green or violet.

Next, begin assembling your hilt—parts will be provided based on your theme and cloisonné pin. Each box of parts includes:

What do you think? Are you going to take a Galaxy’s Edge lightsaber to Universal Studios?