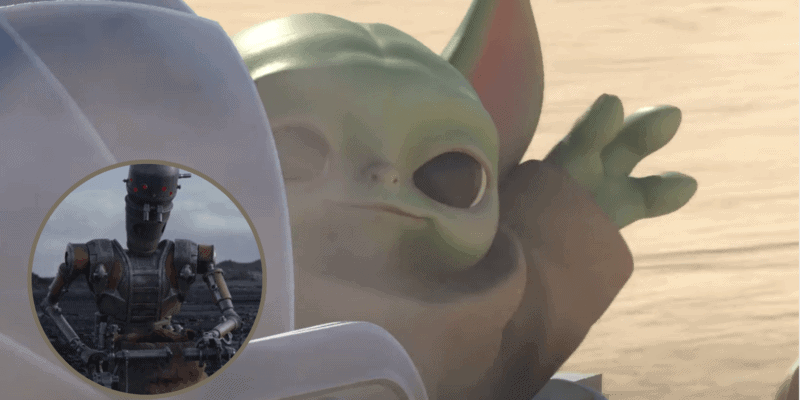 In The Mandalorian Season 1, there were few more tragic moments than droid IG-11 (voiced by Taika Waititi) sacrificing himself to save Din Djarin (Pedro Pascal) and Grogu (AKA The Child AKA Baby Yoda).

The droid, who quickly became a fan-favorite character in the first season of Jon Favreau and Dave Filoni’s hit streaming series, had a somewhat checked past.

Wookiepedia explained it this way:

Around 9 ABY, IG-11 took on a bounty that involved killingGrogu, a Force-sensitiveinfant that was held in a encampment on the desertworldArvala-7. During the assignment, the droid teamed up with the Mandalorianbounty hunter Din Djarin, and the two worked together to eliminate the Nikto mercenaries in the encampment and confront Grogu. Upon seeing the infant, IG-11 was destroyed by Djarin while the droid attempted to kill him.

Eventually, of course, IG-11 was reprogrammed as a nurse droid tasked with protecting Grogu from harm. He ultimately fought alongside Djarin and his companions, including Cara Dune (Gina Carano) and Greef Karga (Carl Weathers), on Nevarro, sacrificing himself to save Grogu from being captured by Moff Gideon (Giancarlo Esposito).

In The Mandalorian Season 2, Episode 4 (“Chapter 12: The Siege”) Djarin and Grogu take the Razor Crest back to Nevarro, where a statue of IG-11 has been erected, apparently in honor of the droid’s selfless act of sacrifice.

Now, in a twist of non-canonical fate, IG-11 has returned to the Star Wars universe!

Related: Is an Animated Grogu Coming to Disney+?

With the help of the Child and a surprise ally, the Mandalorian learns that even a proud warrior needs backup sometimes.

Star Wars Mission Fleet animated shorts celebrate the most iconic and fan-favorite characters and vehicles in the galaxy, blasting off toward new adventures and learning valuable lessons with every mission completed.

The video is just about 90 seconds long, making it the perfect quick Star Wars break for kids (and parents) of all ages!

Will we ever see IG-11 again in The Mandalorian?

As we move forward into The Mandalorian Season 3 and its three confirmed spinoffs — Ahsoka, Rangers of the New Republic, and The Book of Boba Fett — it’s unlikely that we will see IG-11 again.

As previously stated, this new Star Wars animated short is not part of Star Wars canon, so the droid is still a mangled heap of metal in The Mandalorian saga.

Nonetheless, with Pedro Pascal’s recent confirmation that The Mandalorian will jump timelines — possibly using the World Between Worlds, which first appeared in Star Wars Rebels — nothing is impossible in Star Wars.

Waititi could also, of course, reprise the droid in a flashback scene in the upcoming season or even make a cameo in another series set in a different part of the Star Wars timeline.

What do you think? Could IG-11 return to The Mandalorian in a flashback cameo or even via time travel within the Star Wars galaxy?