YouTuber Recreates Disney Songs in 'Animal Crossing'! - Inside the Magic 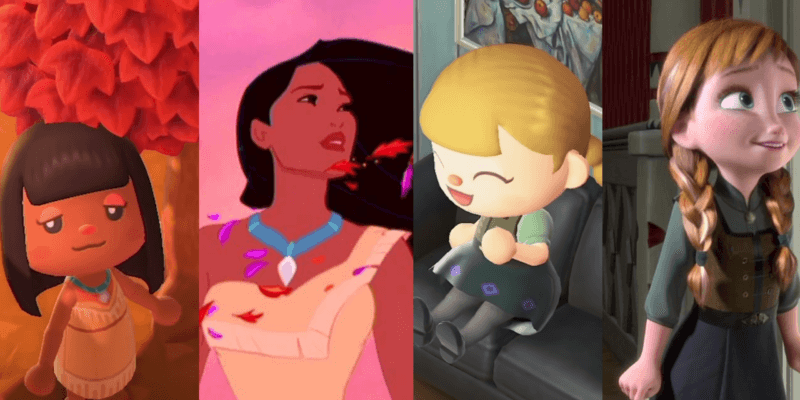 It’s no secret that we here at Inside the Magic love playing some Animal Crossing. From recreations of Disneyland to the Haunted Mansion to movie scenes, we’ve covered it all. However, we’ve never seen Animal Crossing Disney song covers.

Lucky for us, that all changes today as we cover the amazing channel of Maedong — a YouTuber with some serious talent. They’ve taken what you can do in a Nintendo Switch game to a whole new level!

The channel has been creating some epic Disney covers, providing the vocals themselves and recreating the videos in Animal Crossing: New Horizons. Each of these mini music videos is superb but be warned: you’ll never see anything cuter!

If you ever wanted to see ‘Colors of the Wind’ recreated in Animal Crossing form, today is your lucky day! Maedong has created an adorable cover of the song. Their voice is very pleasant to listen to, and it accompanies the incredible visuals perfectly.

It’s always amazing to see how well gamers can recreate things using supplies from Tom Nook’s store and a couple of natural resources — this Disney song demonstrates it perfectly. They’ve even included a John Smith! Check it out below.

However, you’ll struggle to find a Disney renaissance era song more iconic than ‘Part of Your World’ as performed by Jodi Benson and written by Alan Menken. Maedong’s cover is once again beautiful, and though there isn’t a mermaid tail accessory (yet), the movie has been recreated magically nonetheless. Animal Crossing Ariel looks spot on — especially in that dress — and the underwater scenes have clearly modded the heck out of the inside of somebody’s house which is incredibly impressive.

Songs from Frozen and Tangled both fit perfectly in Animal Crossing

However, Maedong hasn’t just created Animal Crossing Disney song covers for the renaissance era. They’ve also made some fantastic covers of more modern tunes from Frozen and Tangled (two of the most profitable Disney movies ever!). For Frozen, it may surprise you that they haven’t covered the film’s most iconic song; ‘Let it Go’. Nope, instead, we get a charming rendition of ‘Do You Want to Build a Snowman?’ with some suitably frosty visuals.

Again, there’s some real creativity on display here with how this creator replicates the movie’s events in Animal Crossing: New Horizons. Using the icicle wall decals is a nice touch, but I dread to think how long it took for Tommy and Timmy to have them in stock! The best part of this cover is that you can also listen to a Korean version on Maedong’s channel, which is equally lovely.

Finally, we come to ‘When Will My Life Begin’ from Tangled, along with ‘See the Light’. These songs are a real fan favorite,  and soon to be classic pieces of Disney music. Fortunately, Maedong knocks it one out of the park with another exceptional cover. We love the use of the Frog outfit to recreate Pascal. There are unfortunately aren’t too many chameleon costumes to choose from!

We can’t wait to see what Maedong does next. Their Animal Crossing Disney song covers are wonderful, but their channel features far more than just Disney content. Check it out here.

Animal Crossing: New Horizons is the place to be for pop culture recreations. Hopefully, we’ll see some elements of this charming game in Super Nintendo World when the theme park opens, though at the moment it only has Super Mario branded IP.

Comments Off on YouTuber Recreates Disney Songs in ‘Animal Crossing’!