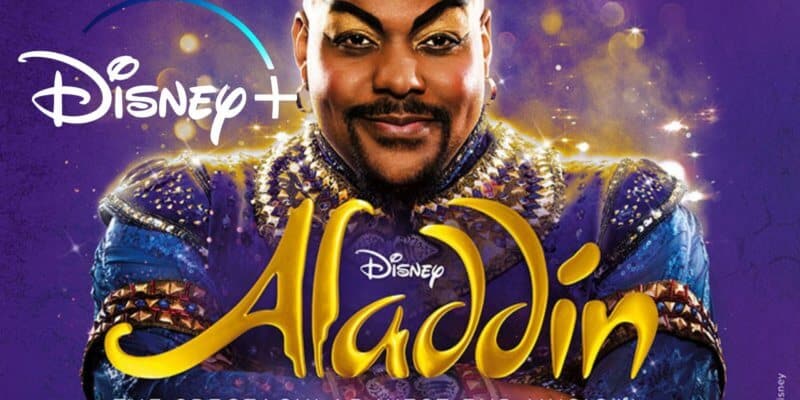 Disney+ was the saving grace of 2020, and it looks like things are not slowing down in 2021. Aside from the plethora of Star Wars and Marvel content coming our way — it may be possible that Disney fans may be getting more Broadway content to the streaming service.

TheDisInsider recently shared a rumor that the West End version of Aladdin may be coming to Disney+, as a filmed stage performance — and the theater school girl in me fainted while reading. Aladdin ran at the Prince Edward Theatre from June 15, 2016, until 2019 when Disney’s Mary Poppins took over.

Reportedly, “following Aladdin’s closing, the theater did not go dark, and the sets were not dismantled. This was because a special performance had been scheduled in semi-secrecy, with a cast comprising of members from the London, New York, US Tour, and Australian productions.” TheDisInsider continued to say, “It was said that the recording was to be released in Q4 2020, December to be exact. As you probably noticed, not only does the musical remain unreleased, but it also remains unannounced by Disney. Since it’s unannounced, we can only speculate why it was delayed.”

Considering we have yet to hear about a stage adaptation of Aladdin coming to Disney+, all of this is truly speculation — but TheDisInsider did make a good point. With the amount of major content that was released on the streaming service in December (The Mandalorian, Soul) it does make sense to scatter the content a little more and to not have released everything in Q4 of 2020. Disney+ could almost guarantee that it would either keep or grow in terms of subscribers with Season 2 of the hit show The Mandalorian airing, as well as the theatrical-turned-streaming release of Soul — Aladdin was seemingly not needed.

And if we wonder why the Broadway musical was not announced for January 2021, we can also speculate that Marvel’s newest upcoming release, WandaVision –– starring Elizabeth Olsen and Paul Bettany who will reprise their respective roles as Wanda Maximoff and Vision from the MCU film series — is currently holding its own in terms of anticipation.

Why should Disney release the West End version of Aladdin to Disney+?

If the rumors are correct, and the musical has already been filmed, well, just let me know where I can rub that magic lamp so I can wish the musical straight to Disney+.

Having seen the original Broadway cast of Aladdin, I am sure I speak for a majority of the standing-ovation audience when I say the show took me to “A Whole New World.” Full of action, fantastic dance sequences, and beautiful singing — the show is a feel-good family production, perfect for a Disney+ audience.

We also have already seen major success from bringing stage musicals to Disney+. The excitement that Hamilton brought to Disney+ when it was announced that the original cast, including Lin-Manuel Miranda, was going to be available for the cost of a McDonald’s combo — when Broadway tickets were nearly impossible to snag without selling a kidney — was unmatched. According to Variety, Hamilton drove up Disney+ subscriptions by 74%, and if Disney wants to keep that theater-loving audience, we need more theater.

If Disney were to start filming these Broadway shows, they would be filling an empty void that no other streaming service has been able to conquer. Considering Disney has its own touring theater division, and owns the rights to many different Broadway musicals, they would be able to film productions such as Beauty and the Beast and have them available on the streaming service easily. It would be the first major streaming service with this intention and it would work perfectly for shows like Aladdin, which would film at the end of the run and therefore would not disrupt theater ticket sales.

In the end, this is currently all speculative, but this reporter truly does hope to see Agrabah on stage through Disney+. Considering the live-action version did so well, it seems like the lucrative choice for Disney+ to make!

If you want to check out the West End version of Aladdin, you can watch the trailer below:

Do you think the West End version of Aladdin was filmed for streaming purposes? If so, do you think Disney would bring it to Disney+? Would you want to see more on-stage Disney musicals on the streaming service?

Comments Off on ‘Aladdin’ Musical Reportedly Coming to Disney+