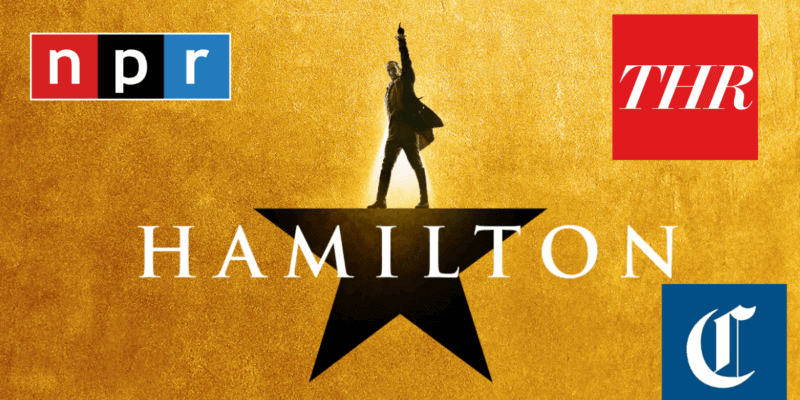 This Friday, Lin-Manuel Miranda‘s Broadway smash Hamilton, will premiere on Disney+. And today the critics’ reviews are in.

“At the end of the day, this is Hamilton, as performed by the original Broadway cast, which means it’s brilliant.” –Cinemablend

“On the whole, absolutely, positively, there is new insight and new excitement here for people who already know that they love this show, and even for those who have stayed away from the album. Hamilton is a piece whose status as art is constantly threatened by its status as a phenomenon and a status symbol; the cultural exhaustion has been, at times, very real and beyond understandable. This is a good reset, and a good chance to put a fresh eye on it.” – NPR

“In most filmed versions of live experiences, you’re conscious of a disconnect between the scale of performances aimed at the back of the house and the needs of the camera. That is shrewdly avoided here, even in the case of Jonathan Groff’s outre King George, thanks to the careful and generally seamless interpolation of close-ups filmed later.” – Chicago Tribune

“Audiences seeing this cast for the first time will be bowled over by the depth of the performances, notably so with Leslie Odom Jr. as Aaron Burr, the politically ambitious also-ran who feels the hand of Hamilton in his every failure. Odom never allows him to become the mere villain of the piece.” – The Hollywood Reporter

Since it debuted on Broadway five years ago, Hamilton has captivated the nation, turning more people into fans of both history and musical theater. The cinematic version that will be uploaded onto Disney+ was filmed in 2016 with the entire original cast, and save a few F-bombs censored out, subscribers will be able to watch the show in its entirety. When Disney won the distribution rights, it marked the most expensive single-movie deal in Hollywood history.

It has been announced that Broadway will remain closed due to the global pandemic until 2021. But even when theaters were open, Hamilton tickets were expensive and hard to come by. Now, everybody with access to a Disney+ account will be able to enjoy some form of this American musical masterpiece.

Have you had the chance to see Hamilton? Are you excited to watch it on Disney+? Let us know in the comments!

Comments Off on Critics Give Rave Reviews for ‘Hamilton’ on Disney+