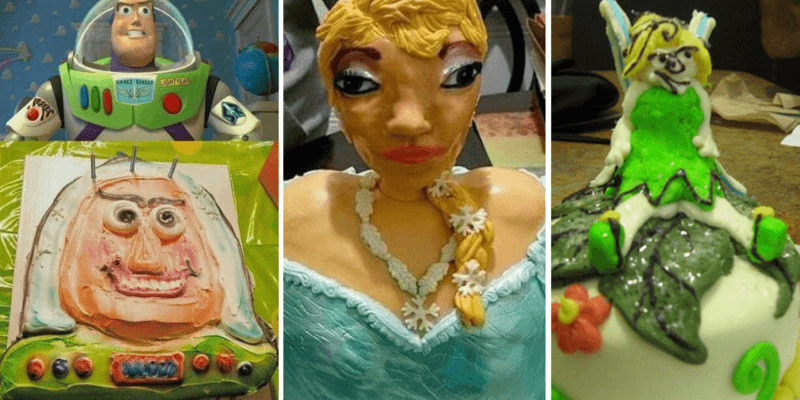 The internet is an excellent platform for budding Disney chefs to share some stupendous works of art. These awful Disney cakes, regrettably, aren’t.

We’ve compiled eight of the most fantastically dreadful Disney cakes from around the internet that are both hilarious and horrifying.

Strap in for some hilariously terrible Disney cakes!

Mickey and Minnie?! What happened to you guys?

We’ll start with two of the most iconic Disney characters out there; the mascot of the franchise, Mickey Mouse as well as Minnie. First, the Mickey cake. To be fair, this cake decorator has got the main features of Mickey down. It’s just the proportions are a little off. At least he’s smiling. This is not a Mickey Mouse that you’d like to hug at The Magic Kingdom, that’s for sure.

Minnie is pure nightmare fuel. The squashed up face and huge, bulging eyes are definitely offputting. However, the “icing on the cake” is that smile. Oh, that smile. That’ll give any kid a sleepless night for sure. Though this is far, far, from what you’d call a perfect cake, it gets worse. Trust us.

Cakes that are NOT fit for a Disney princess 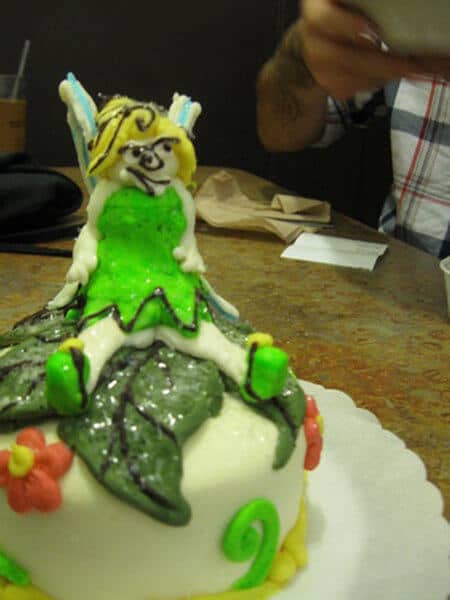 Here we have two Elsas and one Tinker Bell cake. First, Elsa number one. To be fair, I can see the resemblance. It isn’t the kind of cake you’d see at a Disney park, but if it’s a homemade attempt, I applaud it (as with all of these cakes).

Elsa number two, however, is one of the funniest things ever to grace the internet. It’s beautifully hideous. The lips, the massive blue eyes, the red cheek toppings; everything about this cake does not work. And yet that is what makes it so amazing. This cake is the Sharknado of the bakery world. It’s so bad it transcends badness and becomes amazing.

And as for Tink. They tried, didn’t they. But gosh, that cartoonish, meme-worthy face isn’t Tinker Bell. Mind you, the cake she’s sitting on actually doesn’t look half-bad. I mean, I don’t want it as my wedding cake or anything, but it looks decent.

Buzz and Olaf star in these awful Disney cakes

A quick scroll through Google when searching worst Disney cake will usually come up with these fellas. First, Olaf. Ok so the texture is a mess, but actually – it’s a pretty good resemblance. I would argue that of the eight cakes on display here, the Olaf one comes the closest to capturing the actual look of the character. The twig arms and hair actually look pretty good, and this one is far from a wreck.

But Buzz. Oh, Buzz. What did they do to you? Enough said with this one. It ain’t pretty.

What can we say about this one? It’s meant to be Sleeping Beauty castle, but it’s … um. It’s … yeah. Let’s leave it there.

This article is completely tongue-in-cheek, and we applaud all of the bakers of these wonderfully terrible cakes. It takes a lot to put your creations out there, so we salute you!

Comments Off on Shield Your Eyes: 8 Awful Disney Cakes From Across The Web