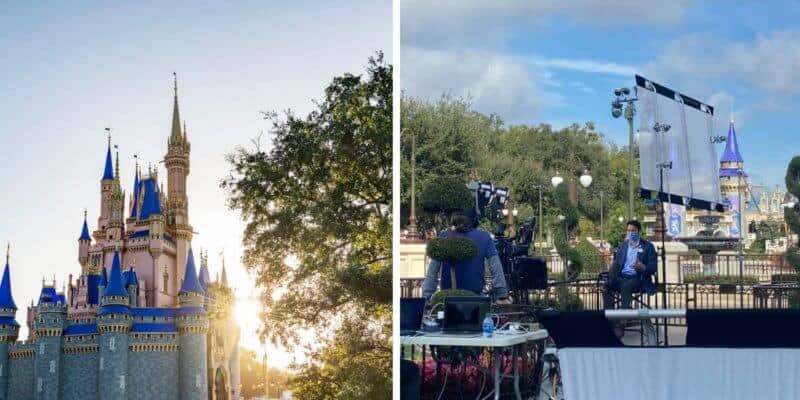 Going to the Magic Kingdom at Disney World is always a magical experience, I mean, it is the Most Magical Place on Earth — but today, Guests can get a behind the scenes look at some of that magic.

Inside the Magic’s Senior Editor Kelly Coffey is reporting from Magic Kingdom today, and noticed that there is filming going on in front of Cinderella Castle! As we can see in the below photo, the filming is taking place on the hub grass just past Main St. USA, with what appears to be one of the Disney Ambassadors.

Disney Ambassador Stephen looks to be sitting down with a Magic Kingdom backdrop while wearing the classic Cast Member galactic-design mask, while a film crew operates behind him.

Here is a wider shot of the filming that is underway, as you can see Disney has quite a large production crew for the project.

Take a look below for some more views of the filming going on at Magic Kingdom.

Although we cannot confirm what exactly is being filmed, the wdw ambassador (@wdw.ambassador) Instagram often creates high-quality content around the Disney parks. For those who don’t know, according to Disney, “Disney Ambassadors serve as the Resort’s “Emissaries of Goodwill,” media representatives, and as official hosts to Resort guests. As official spokespeople, Ambassadors offer the outside community a personal relationship with the Resort”.

Filming at Magic Kingdom, or any other Disney park for that matter is not foreign to Guests. Most recently, we saw the Christmas Day special being filmed back in December 2020 with both Trevor Jackson and Julianne Hough. Commercials are often also filmed at the Magic Kingdom, but they film during park hours, sections of the park are often blocked off heavily so that Guests are uninterrupted on their visit.

Personally, when I saw Disney filming a commercial at Magic Kingdom black curtains were blocking off one of the side streets on Main St. USA, and all I could see were the beaming lights that surrounded the set.

For now, we will need to wait and see what Disney uses this content for, however, it is interesting and fun to see how much work and equipment is needed to make what could just be a simple Instagram post!

If you want to visit Disney World in 2021, click here to get started planning your magical getaway!

What do you think the filming was for? Let us know your thoughts!